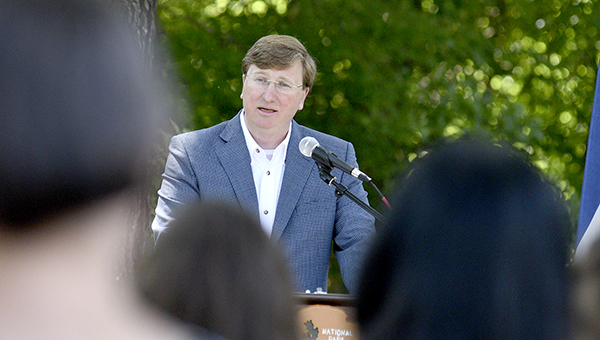 JACKSON (AP) — Gov. Tate Reeves instituted mask mandates in 13 more Mississippi counties Tuesday but chose not to implement the measure statewide, a week after several prominent health care leaders called on him to do so.

During a press briefing, Reeves said he believes issuing mask requirements in counties with the highest number of new cases will encourage people to take the regulations more seriously than a blanket approach would. A total of 54 out of the state’s 82 counties now have a mask mandate.

“I almost feel like there are those out there who really, truly believe if I were to write an executive order, a statewide prohibition against hurricanes in 2021, that we won’t have any hurricanes,” Reeves said. “It just doesn’t work that way.”

Reeves instituted a statewide mask mandate in early August but revoked the measure at the end of September when new coronavirus cases were declining in Mississippi. As cases have risen again in recent weeks, he has begun implementing mask mandates in individual counties.

Four health care leaders have said it’s time for Reeves to go a step further. They wrote a letter to Reeves on Nov. 24 calling for another statewide mask mandate.

Reeves said Tuesday that he would not comment on the letter, but said he believes a county-by-county approach is best for Mississippi currently.

The state health department reported a record number of coronavirus hospitalizations Tuesday, with 1,057 coronavirus patients reported to be hospitalized in Mississippi as of Monday.

“We are getting to the point now where we are getting notifications about patients who cannot get transferred to a higher level of care when they need it, and it’s because most of our hospital systems have been saturated,” Dobbs said during a virtual press briefing with the health department Tuesday.

The state health department said Tuesday that Mississippi, with a population of about 3 million, has reported more than 154,400 coronavirus cases and at least 3,836 deaths from COVID-19 as of Monday evening. That’s an increase of 1,141 cases and 29 deaths from the day before. Twenty-five deaths that occurred between Nov. 24 and Nov. 30 were identified through death certificates.