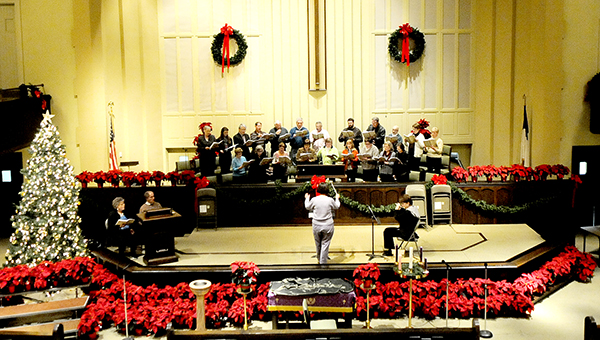 Members of Crawford Street Church practice for the Chancel Choir Cantata in the sanctuary at Crawford Street United Methodist Church in this file photo from December 2012. This year, due to concerns from the COVID-19 pandemic, there will be no Christmas Cantata at the church. (File Photo/The Vicksburg Post)

With Mississippi and Warren County reporting spikes in the number of COVID-19 cases, local churches are either canceling their traditional Christmas programs and services or livestreaming them over Facebook or other online outlets.

The spike in COVID-19 cases began in November and has continued into December. As of Thursday, the county reported 1,849 cases since the first case was reported on March 11.

Mississippi reported 2,168 cases Thursday, and State Health Officer Dr. Thomas Dobbs Wednesday recommended people avoid contact with other people outside their immediate family unless they are going to work or school or buying food for their families.

Tuesday, First Baptist Church announced in an email to its members that it would not have in-house services until after the new year. The church previously suspended in-person services for Nov. 29 and Sunday.

“The church staff and key leaders have decided not to have in-house Sunday school and worship for the next five Sundays due to COVID-19 issues,” the email said. “Our services will be livestreamed only until Sunday, Jan. 10. This is not something we want to do but feel we must do.

“We will have the Lord’s Supper on Sunday, Dec. 20 in the livestream worship service and we ask you to be prepared at home with the elements to participate with the ministers who will lead in the Worship Center,” the email continued.

The church’s Vespers Service will be pre-recorded and available on Dec. 20 at 4:30 p.m., according to the email.

First Baptist will not be the only church livestreaming services into January.

“We’re just trying to get through this pandemic as quickly and as easily as we can,” he said.

As of Thursday, Catholic and Methodist Churches had not announced whether they will suspend in-person services, but two churches have canceled their annual Christmas programs.

St. Paul Catholic Church will not have its Children’s Mass, where children recreate the birth of Jesus, and Kathy Mahloch, music director for Crawford Street United Methodist Church, said there will not be any programs, including the choir’s Christmas cantata.

“Our bishop is very strict about what we can do,” she said.

She said masks and social distancing will be practiced at both events. Admission to the ball is $25 per person.