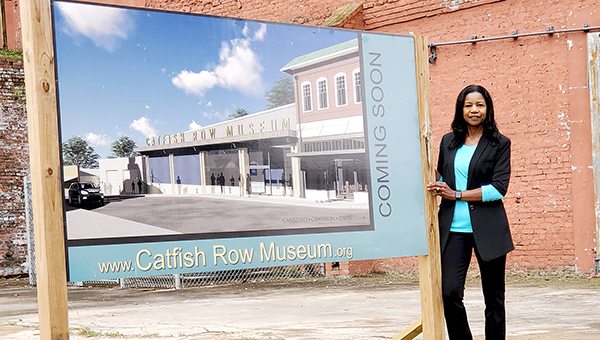 When Linda and James Fondren bought the Monte Carlo Building in 2011, they envisioned a multifaceted attraction that would draw people downtown and teach tourists about Vicksburg.

Moving toward the end of 2020, the goal of telling Vicksburg’s story is still alive in the exhibit cases and on the walls of the Catfish Row Museum that occupies the ground floor of the building, but as the sign at the museum’s entrance tells visitors, the few display cases and informational wall panels are a sneak peek at what’s to come.

“This will be a one-stop-shop,” Fondren said. “What we will have here will send people out to other areas to look at artifacts and other historical places that they may have not known about because we don’t really have that central location where we can tell people where attractions are.

“That is something pretty spectacular; give people an understanding of what Vicksburg is about. People desire to know about experiences and I believe people will spend more than just a day here; they will stay longer,” she said.

“We have the art, the religion, we’ve got the history, a wealth of immigrants and why they settled here, we’ve got so much knowledge here. The military park we should be marketing cultural tourism with what we have here.”

Some of that cultural education, she said, has been accomplished through workshops featuring experts to teach people about artifacts, oral history and digitizing photographs.

There have been traveling exhibits like an African American history program and exhibit highlighting African Americans’ contribution to medicine, mathematics and engineering.

In December 2019 the museum sponsored a sneak preview for residents to give them an indication of what is planned.

Members of the museum’s board have been working on fundraising for the program, Fondren said, adding the pandemic has slowed the process and forced the museum to close its doors and discontinue workshops. She hopes to be able to reopen the museum in March.

“City’s development and return of the riverboats have given us cause to re-think how we want the museum to be presented,” Fondren said.

Because the museum is across Washington Street from the Jesse Brent Lower Mississippi River Museum and Interpretive Center, she said, the board believed the museums could complement each other.

Construction on the Monte Carlo Building’s interior begins in January with the removal of a temporary wall and the construction of a kitchen.

The kitchen, Fondren said, is part of a partnership with the U.S. Department of Agriculture/Environmental Protection Agency program to promote locally grown food and good nutrition.

The kitchen would be used for cooking demonstrations and other events.

“We want to unite the farmers market, community garden and the museum into a downtown food hub with a kitchen in the museum that is being designed and planned,” she said.

The Monte Carlo Building has its own unique history.

Built in 1905 by Fannie Vick Willis Johnson, the building housed Christian and Burroughs Co., which built wagons and carriages. It was later used by a car dealership, which stayed in the building until the late 1920s, and was a 7-Up bottling plant until the 1960s.

The building was later turned into a nightclub owned jointly by Joe Farris and Jesse Smith and called the Monte Carlo Club, which gained notoriety as a dance hall that booked regional and national rhythm and blues acts in the 1970s and early ’80s.

The building deteriorated, and in 2007 the city razed the north section that was damaged during Hurricane Katrina in 2005.

The Fondrens bought the 115-year-old building from Vicksburg resident Malcolm Carson for $240,000.