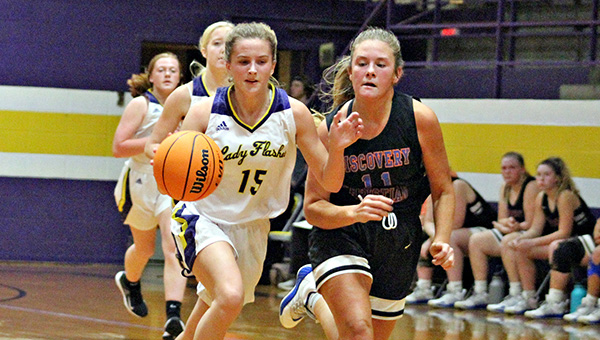 For more than two quarters Thursday night, the St. Aloysius Lady Flashes looked like they might pull off the rarity of a basketball shutout. In the end, they wound up with a prize that seems just as rare — a long winning streak.

Elizabeth Theriot scored 11 points, and St. Al did not allow a point in the first half as it rolled to a 36-16 victory over Discovery Christian.

It was the fourth consecutive victory for St. Al, which went winless two years ago and has struggled to win four games in an entire season in some recent seasons.

“They said that’s the first time in a while they’ve won four in a row here at St. Al. They seem to be playing with more confidence. They seem happier. It’s fun seeing it, because it was a struggle last year most of the time,” St. Al coach Mike Coleman said.

Taylor Chewning, Madi Mathews and Falyn Lusby scored six points apiece for the Lady Flashes (4-2), who started slow but soon blew the game open. After scoring only four points in the first quarter, they outscored Discovery Christian 15-0 in the second to push the lead to double digits.

Thursday’s game was the first for St. Al in two weeks, but began a busy stretch of four games in eight days. It has three home games next week against Hartfield Academy, Clinton Christian and Greenville-St. Joseph, with the latter two coming on back-to-back nights.

The game against Hartfield is Tuesday at 6 p.m.

“It’s going to be tough playing Thursday and Friday because we’re playing two really good teams, and coming off that game Tuesday Hartfield will be incredible,” Coleman said. “But it’s good to get to play. I’m just glad we’re getting to play.”