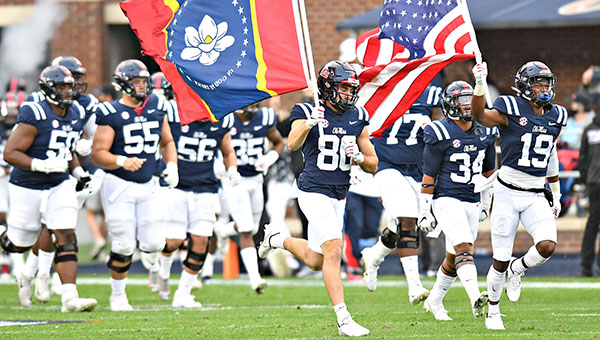 BIRMINGHAM, Ala. — On the same day the program’s most recent COVID-19 quarantine was extended, the Ole Miss Rebels found out the rest of their 2020 football schedule.

Ole Miss will play Texas A&M on Dec. 12 and LSU on Dec. 19, the Southeastern Conference announced. Both games had been postponed previously because of COVID-19 issues among various schools.

Next week’s game at Texas A&M will be contingent on the Rebels getting a clean bill of health. The university announced Friday that it has paused all activities within the football program until at least Wednesday, Dec. 9, due to positive COVID-19 cases.

In a statement, Ole Miss said the university’s leadership will remain in talks with the SEC on the effects of the suspension on the schedule.

“Testing will continue during this period, and the appropriate health measures will be taken for those student-athletes and staff members affected by the virus,” the university said in a statement
Prior to the 2020 season, the SEC designated Dec. 12 as an open date for all schools in order to reschedule postponements that developed during the season due to the impact of COVID-19.

Six rescheduled games will be played next Saturday — Ole Miss at Texas A&M. LSU at Florida; Auburn at Mississippi State; Georgia at Missouri; Tennessee at Vanderbilt; and Alabama at Arkansas.

Dec. 19 is the date of the SEC championship game in Atlanta. Teams that do not qualify for the championship game are eligible to play rescheduled games on Dec. 19, and four of those were added to the schedule — Ole Miss at LSU; Missouri at Mississippi State; Texas A&M at Tennessee; and Vanderbilt at Georgia.

Vanderbilt and Georgia were supposed to play this weekend, but postponed their game on Friday because of Vanderbilt’s COVID-19 issues. If Georgia qualifies for the SEC championship game, the game against Vanderbilt will be declared a no-contest and not rescheduled.

The Texas A&M-Tennessee game will also be declared a no-contest and rescheduled if Texas A&M qualifies for the SEC championship game. Alabama can clinch the SEC West title by beating LSU Saturday in Baton Rouge.

For more than two quarters Thursday night, the St. Aloysius Lady Flashes looked like they might pull off the rarity... read more