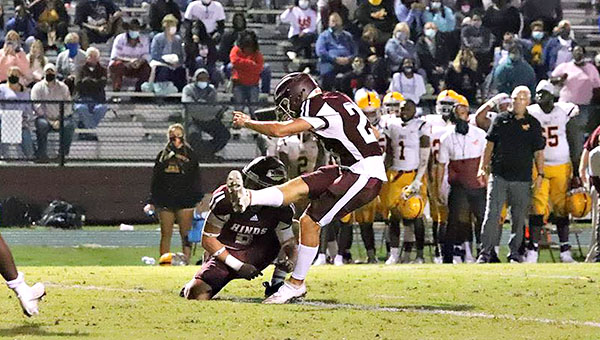 Three former Warren County football stars were among the best of the best at the junior college level this season.

Winston and Smith made the South’s second-team All-State squad. Johnson was the second-team quarterback for the North.

Johnson, a former Vicksburg High standout, completed 29 of 42 passes for 300 yards in six games with Coahoma this season. The sophomore also ran for 210 yards and two touchdowns.

Johnson’s best game was against Holmes, when he threw for 175 yards and ran for 103 yards and two TDs. He started the last two games and Coahoma won both to finish with a 3-2 record.

Winston, a freshman from Warren Central, started on Hinds’ offensive line and helped the team rank first in the MACCC in rushing yards per game (231) and yards per rush (5.4).

Smith, a sophomore from St. Aloysius, converted 5 of 8 field goal attempts and was 15-of-17 on PATs for Hinds. He made four of his field goals in an 18-16 win over Jones College, including the game-winner as time expired.

Hinds wound up with 10 players on the All-MACCC South team. Defensive lineman Jaylan Ware made the first team after posting 22 tackles in only four games.

McCray passed for 844 yards and six touchdowns, and ran for 199 yards and three TDs. Caston caught 14 passes for 217 yards and two touchdowns.

BIRMINGHAM, Ala. — On the same day the program’s most recent COVID-19 quarantine was extended, the Ole Miss Rebels found... read more