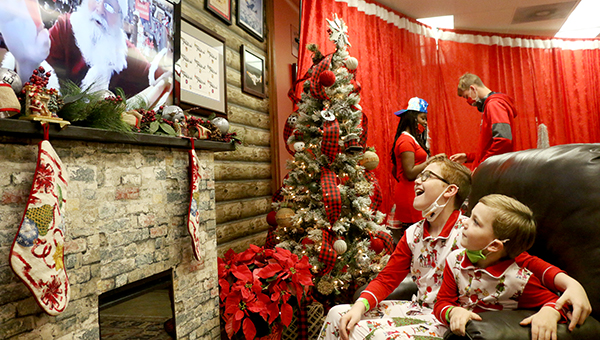 Iler Ellis, 8, had doubts about whether the man in red was real.

But after visiting with him Saturday during the annual Pajamas, Pancakes and Planes Breakfast with Santa at the Southern Heritage Air Museum in Mound, he had no more doubts.

“I used to actually think the Santa that came here was not real, but when I saw him on the TV,” Iler said. ” I knew he was real because I saw the naughty list and he knew my name,” Iler said.

Sponsored by the Southern Heritage Air Foundation, Pajamas, Pancakes & Planes Breakfast with Santa is a fundraiser for the organization, which is geared toward preserving the stories of local and regional WWII Veterans and aviation history.

This year marked the eighth for the event, but the first that has had to deal with concerns about the COVID-19 pandemic. This year, instead of Santa visiting in person, he stayed at the North Pole and visited the children through Zoom.

Foundation President Patty Mekus said a room was set up just for the visit, with only the child and their parents allowed in.

“It is just more intimate because there is not anybody in the room but the family,” she said.

Iles, and his younger brother, Virgil, 5, enjoyed their personal talk with Santa.

Iler said he was also glad to hear the news.

Following the children’s visit with Santa, photos were taken with the family standing in front of the screen showing Santa. Each child got to choose a gift of their liking that Santa had sent from the North Pole.

As in past years, the event offered booths, photo areas and games, but because the number of children who could attend this year was reduced for social distancing protocols, a few new activities were added. One new event was set up in the middle of the museum’s hangar that allowed children and grown-ups to have snowball fitghts.

Although changes had to be made in order to follow the Center For Disease Control’s COVID-19 guidelines, Mekus said she was “very pleased” with how things went.

“Everything just fell into place the way it needed to with the current environment,” she said.

Founder and chairman of the Southern Heritage Air Foundation Dan Fordice complimented Mekus and all those who volunteered.

“I think they have done a wonderful job,” Fordice said. “Patty has got the most unbelievable bunch of volunteers around here that I have ever seen.”

The annual event features two “seatings,” with one beginning at 8 and the other at 10 a.m. Both events, just like in years past, were complete sell-outs.

Third day of searching for missing boaters on the Mississippi ends

They are not giving up. That’s the message Warren County Sheriff Martin Pace and the dozens of other searchers have... read more