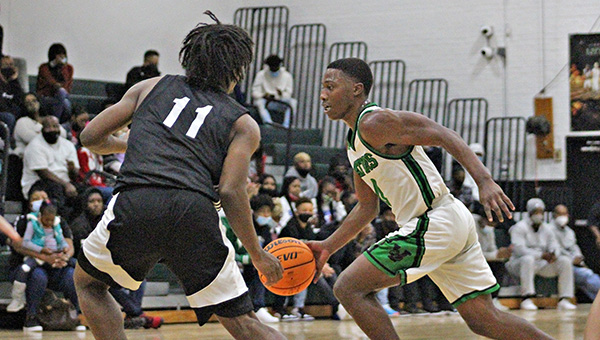 Vicksburg’s Sean Hardy drives against Warren Central’s Wade Sims (11) in the second half of Saturday’s game. Hardy had 15 points, eight rebounds and five assists to lead the Gators to a 73-41 victory. (Ernest Bowker/The Vicksburg Post)

The Vicksburg Gators looked like a well-oiled, 3-point shooting machine on Saturday. Warren Central hadn’t played in a month, and looked every bit like a team that hadn’t.

Taylon Smith hit six 3-pointers in the first half to help Vicksburg build a 33-point lead at halftime, and finished with 24 points total as the Gators swamped Warren Central 73-41 in their rivalry showdown.

Sean Hardy added 15 points and eight rebounds for the Gators, while Keshawn Brown had nine points and 14 rebounds.

“We’re just trying to get the guys to give us a whole lot of energy and effort, and that’s what they did. They look for the shooters, and once Taylon gets going we get going,” Vicksburg coach Kelvin Carter said.

Del’Jayvien Harried led Warren Central (1-2) with 15 points, while Travis Williams and Wade Sims scored 10 apiece. The Vikings were playing their first game since Nov. 10, however, and showed some of the rust from a nearly month-long layoff. They did not score until Sims dropped in a layup with 2:31 left in the first quarter, by which time Vicksburg had raced to a 16-0 lead.

“We hadn’t played in a month, but how many people have? They’ve (Vicksburg) played one game in a month,” Warren Central coach Bruce Robinson said. “We’re throwing excuses out the window. If you start talking about excuses, you can start talking about not having a gym, not having a weight room. All of that stuff comes together. But you still have to overcome that. We’ve got to overcome that. We just didn’t execute the game plan. We hadn’t played in a month, but we had two weeks to prepare for them.”

Smith buried a 3-pointer in the closing seconds of the first quarter to give Vicksburg a 25-5 lead, and then made four more in the second to push the advantage to 52-19 by halftime.

In all, Vicksburg made eight 3-pointers in the first half. Smith had two and Malik Franklin one in a 90-second span midway through the second quarter. Smith had all of his 24 points before halftime.

“It’s like poetry in motion,” Carter said of Smith’s first-half performance. “One thing about him is, he works. He’s about the only kid that will go out and shoot balls in the rain. He’s being recruited, too, so it’s going to pay off for him.”

The Gators finally went cold in the second half. They did not make a 3-pointer after halftime, which helped Warren Central to outscore them 22-21 over the last two quarters. The Vikings never got the deficit under 20 points, though.

“We got out of the press and just played man defense, and they made a little run,” Carter said.

Oak Grove goes for two, wins the big one in Class 6A