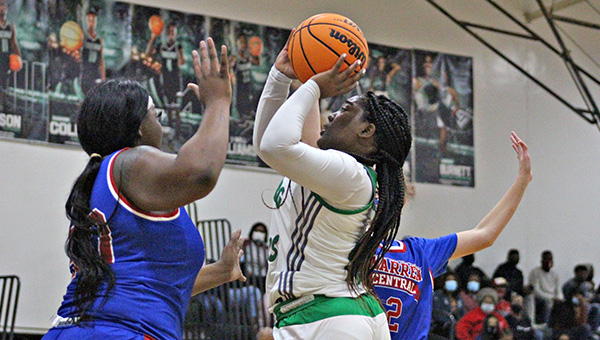 When he was evaluating his team’s performance against Vicksburg on Saturday, Warren Central coach Darein Hilliard liked everything he saw — except for one small detail.

The Lady Vikes only made two field goals and scored a total of seven points in the second and third quarters combined. The dry spell helped Vicksburg gain the lead, and then extend it, and finally to beat the Lady Vikes 42-31.

“We played probably one of our best defensive games of the year. We had our lowest turnover amount of the year. And then we come out and we’ve got wide-open looks. We did everything we needed to do as far as practice was concerned to take care of the basketball. The object of this game is to make shots and we didn’t do it today,” Hilliard said. “It just wouldn’t fall for us. Vicksburg has a pretty good offensive squad. You hold them to 42 points and you think you’ve got a shot. But we didn’t get anything to fall for us.”

It was a sometimes-ugly defensive battle that the Missy Gators won for their fourth consecutive victory in the rivalry series. Layla Carter led the team with 12 points, while Ja’Na Colenburg and Janiah Caples scored eight apiece.

Vicksburg held its own on the boards, which denied second-chance opportunities during Warren Central’s cold spell and allowed it to shake off some poor shooting of its own.

Warren Central did not make a field goal in the second quarter until the final minute, and only had one in the third quarter. Vicksburg trailed 8-5 after the first quarter, but pulled ahead by 10 late in the first half and led by as many as 20 early in the fourth quarter.

“When Zykerri (Segrest) went out, we took advantage of her being out,” Vicksburg coach Troy Stewart said. “I tried to give them a little more pressure because I knew they couldn’t just throw it down to the baseline and score — like they did in the fourth quarter. It seemed to have worked.”

Stewart said the late surge by the Lady Vikes was caused, in part, by his own experimentation with some new personnel combinations.

“When I went to the bench, the kids didn’t have any chemistry together because they haven’t played together in practice. The ladies that I put in had never played with that unit, so it was a little different for them,” Stewart said.

The Missy Gators bounced back from a close loss to Northwest Rankin last Tuesday and pulled their record to an even 3-3. Stewart said he plans to use the December schedule as a tune-up for the region games and — hopefully — playoff games that lay ahead. Vicksburg reached the MHSAA Class 5A semifinals last season, and exposing a roster loaded with sophomores to as many in-game situations as possible will be crucial to getting back.

Vicksburg plays at Yazoo City on Tuesday and then hosts McComb next Friday for senior night.

“I’m thinking it was both teams trying to get a groove and trying to figure out what works for each other. On my end, especially, I really wanted to find out what we could get moving and what we couldn’t. I saw some things I needed to see,” Stewart said. “A rivalry game is never a tune-up game. You always want to try and come out victorious. But I know that we’ve got a lot of things to work on going into January, so I tried to do different things to see how we would reach to certain things. I’m going to go back and watch film and make some adjustments.”

The Vicksburg Gators looked like a well-oiled, 3-point shooting machine on Saturday. Warren Central hadn’t played in a month, and... read more