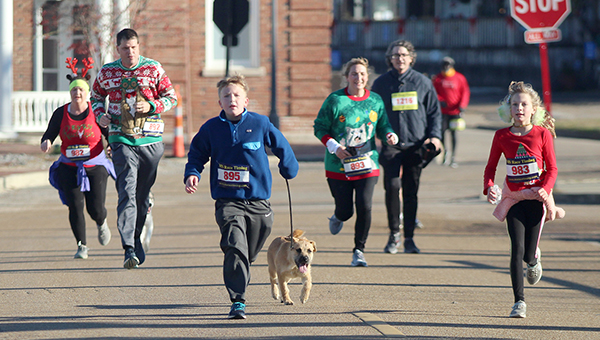 Santa ran with a Ridgeback. A Cockapoo named Cooper won the race. And the Grinch didn’t quite steal the show.

It was indeed a day for the dogs, as nearly two dozen — along with more than 100 humans — braved chilly weather and the hilly streets of downtown Vicksburg to participate in the Reindeer Run 5K on Saturday morning.

The event was a fundraiser for Paws Rescue, a local no-kill pet rescue organization. Nearly 200 people registered for the Reindeer Run, organizers said, and 130 completed the race.

“With COVID, we were going to be happy if we had 100. We’ve been overwhelmed. It’s been great,” said Reindeer Run event coordinator Debbie Haworth. “It’s more than we thought it would be this year. And more than that, our sponsors. We weren’t sure if we were going to go ahead or not. Even if we raised $1,000 for Paws Rescue it was worth it. We raised $11,400 last year and we’re going to top that this year.”

Leigh Conerly, the president of Paws Rescue, said the money raised from the Reindeer Run — from nearly 20 local sponsors as well as entry fees — helps fund the group’s operations all year long. Donations are always accepted through Pay Pal at its website pawsrescuepets.org, or by mail at P.O. Box 13, Redwood, MS 39156. Donations of pet food are also welcome.

“We survive strictly on donations. We are not funded by the city or county,” Conerly said. “This is the only fundraiser we were able to have this year, so we were trying to stretch last year’s money as much as possible because the need never stops for the animals. Hopefully, this will pull us through the year.”

Besides the 5K run and race walk, a slew of activities accompanied the Reindeer Run, which had a distinct animal theme. There were “Reindeer Games” for children beforehand, and a pet parade afterward. Postrace treats for the pups were on tables alongside treats for their owners.

People ran and walked with their dogs, and prizes were awarded for the best pet costume. Kimber, a dog owned by Kaci Lindsey, won for its costume with a Santa puppet attached to its back.

“He’s got to be the Grinch for Christmas. Usually he’s super white, so it made sense to me,” Roberts said. “He didn’t love it. But he never loves baths anyway and it was essentially just a bath.”

The human winners of the 5K were Andrew Klock in the men’s division and Jennifer Smith in the women’s. Klock finished with a time of 18 minutes, 6 seconds — nearly three minutes ahead of runner-up Samuel Terrett, who posted a time of 20:57. Smith’s time was 22:14, which was good for fourth place overall.

“It was a good run. The weather was nice and cool. My favorite running weather, so that was nice,” Klock said. “I came late to the starting line, so I wasn’t in the first wave. But that was OK. I picked it up in the first half-mile or so. I was on my own for a lot of it.”

The real stars of the run were in the last wave, however. More than 20 runners and walkers — including one dressed as Santa Claus — took to the course with their four-legged companions.

The canine winner of the 5K was Cooper Teller, a Cockapoo owned by Blake Teller.

“Cooper and I run together regularly out in the park. This is just the right distance, too, for him. We usually run the South Loop. He’ll usually run a few more miles than me, from going down the hills and all over the place,” Blake Teller said.

“They were nose to tail for a while,” Blake Teller laughed.