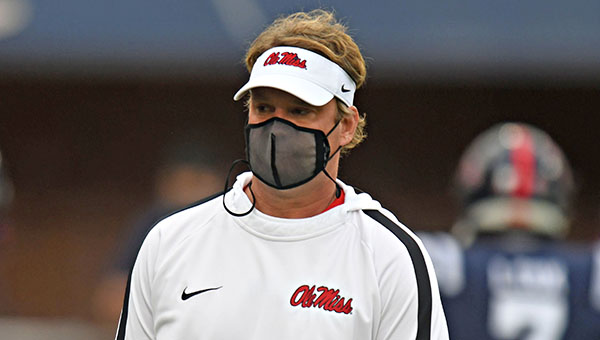 Ole Miss football head coach Lane Kiffin looks around before the game against Mississippi State earlier this season. Ole Miss announced that this weekend’s game against Texas A&M has been postponed because of a COVID-19 outbreak. (Bruce Newman/Ole Miss Athletics)

BIRMINGHAM, Ala. — For the second week in a row, Ole Miss will spend a quiet Saturday at home.

The Southeastern Conference announced Monday that the Rebels’ football game at Texas A&M, scheduled for primetime on Saturday, has been postponed because of COVID-19 issues.

In a statement, the SEC said the postponement was due to a combination of positive tests, contact tracing and subsequent quarantining of individuals within the Ole Miss program.

Last week, Ole Miss announced it had suspended team activities until Wednesday because of a COVID-19 outbreak among its roster. On Monday, the university announced that the quarantine has been extended until at least Friday.

This is the second time the Ole Miss-Texas A&M game has been postponed. It was originally scheduled for Nov. 21, but postponed because of earlier COVID-19 outbreaks.

Ole Miss was supposed to play LSU last weekend, but that game was moved to Dec. 19 when the SEC reconfigured its late-season schedule to accommodate a number of makeup games.

“We’ve stressed throughout 2020, and it’s a great lesson about life, control what you can control,” Texas A&M head coach Jimbo Fisher said in a statement. “It’s unfortunate we are unable to play Ole Miss this week. I feel for our seniors who were looking forward to being recognized and playing at Kyle Field. We will go back to work controlling what we can, and that is preparing to play Tennessee next week.”