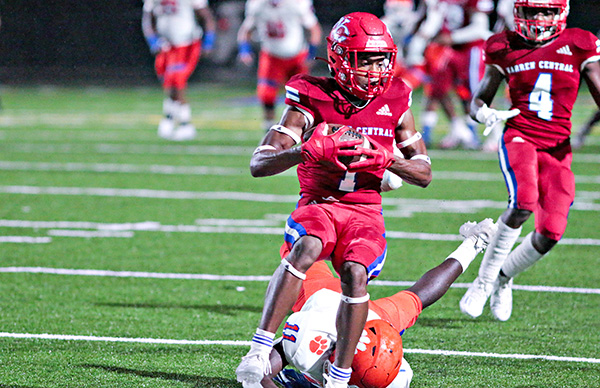 When it came time to select the all-state teams, Mississippi’s coaches did not overlook Warren County.

Tevin Bell, a senior cornerback, was a first-team All-Class 6A selection. He led the Vikings with five interceptions and was a key component of a unit that allowed only 7.5 points per game and posted two shutouts. Anchored by its strong defense, Warren Central (9-3) reached the second round of the MHSAA Class 6A playoffs.

Smith and Dontavious Bell were second-team selections on the Class 6A team.

Smith was another key piece of the Vikings’ defense. The senior defensive end totaled 53 tackles, with 12 for loss and eight sacks. He also had two interceptions that he returned for touchdowns.

Montgomery was a two-way starter for Vicksburg, but was selected as a defensive lineman on the Class 5A All-State team. He had 40 tackles, three sacks and two forced fumbles this season while facing some of the top offenses in the state.

Neshoba Central running back Jarquez Hunter was selected as the MAC’s Class 5A Player of the Year, and Ridgeland quarterback Zy McDonald was the Offensive Player of the Year. Both of their teams resided in Region 2-5A with Vicksburg.

Sports column: Athletes should savor games, moments while they can

We’ve reached the final month of 2020, at last, but early December is feeling a bit like mid-March. COVID-19 cases... read more