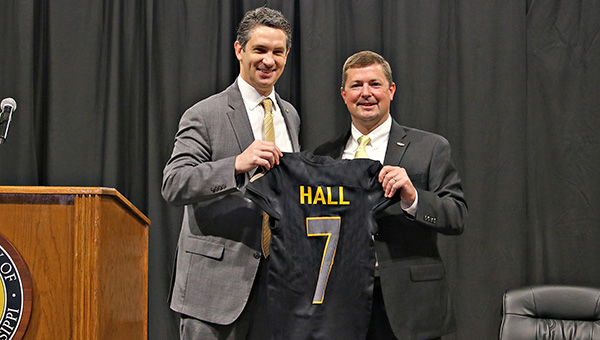 Will Hall has coached college football in seven states during his career, never staying too long in any one place to lay down a ton of roots.

From the sound of it, he didn’t need to. As he was introduced Monday as the next head coach at Southern Miss, the Amory native made it clear he’s a Mississippi Man through and through, and was thrilled to be back home.

“I got dropped off at the fieldhouse when I was 5 years old and I’ve gone every day since then,” Hall said. “The way I grew up, around (his father Bobby Hall) and coaches in this state, I wouldn’t trade it for anything. I’ve had a special upbringing. I knew what I wanted to be at a young age.”

The 40-year-old Hall, who is the son of high school coaching great Bobby Hall, is a rising star in the coaching community and already a bit of a Mississippi sports legend. While playing for his father, the younger Hall led Amory High School to the MHSAA Class 3A championship in 1998 and was an NJCAA All-American at quarterback for Northwest Mississippi Community College.

Hall also won the Harlon Hill Trophy — the NCAA Division II equivalent of the Heisman — while playing for North Alabama in 2003. Since he started his coaching career the following year, however, he’s had a hard time finding his way back home.

Hall has worked at nine schools in seven states, including head coaching stints at Division II West Alabama and West Georgia. He was most recently the offensive coordinator at Tulane. The Southern Miss job is his first in his home state.

“I’ve wanted this job for a long time. Through the years it didn’t work out a few times. Maybe the alignment wasn’t right,” Hall said. “But getting to know (USM athletic directory) Jeremy (McClain) and (Southern Miss president Dr. Rodney) Bennett through this process, it became apparent to me that this was definitely the time.”

Although he’s from North Mississippi, Hall is well versed in the history of Southern Mississippi. During Monday’s introductory press conference he mentioned a number of the great Golden Eagles coaches of the past. He has a family tie to Pie Vann, and said he’s grown friendships with Jeff Carmody and Jeff Bower over the years.

“My dad started letting me go to the coaching clinics when I was 12. One night my dad and Coach Bower were at Tico’s Steakhouse in Jackson and I got to listen to my dad and Coach Bower all through the night. We shut Tico’s down that night,” Hall said. “We’re fixing to get this thing going like those men had it going back then, and it’s fixing to happen fast, so you need to get ready.”

Hall’s offenses at Tulane ranked in the top 25 in the country the past two seasons, but he will have some work to do in bringing Southern Miss back to its former glory. The Golden Eagles had been to a bowl in four of the past five seasons, but have a 2-7 record going into Thursday’s season finale against Florida Atlantic and will finish below .500 for the first time since 2014.

Although this has been a year to forget for the once-proud Southern Miss program, Hall made it clear that he thinks it’s more a bump in the road than a barrier that will be hard to overcome.

“No more excuses. We’ve got all the resources here to be special. We’ve got everything we need to get back to being the best football-playing Group of Five school in the United States of America,” Hall said, before issuing an appeal to Southern Miss’ fans and alumni.

“But we’ve got to band together. We’re a little bit frayed right now. You know it. I know it. Believe in what we’re about to do. I’ve got a vision and a very detailed plan to get there, but I need you to go out and get everybody else banded together and pull this rope together,” Hall said. “If all of our resources will unite and get behind this thing, we’re fixing to have so much dadgum fun we’ll be talking about it for years and years.”