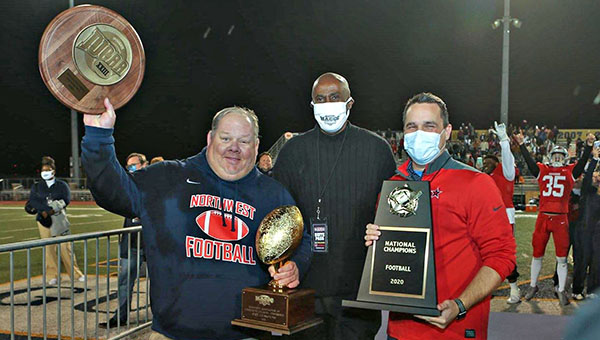 Four Down Territory: Northwest is the champs, plenty of drama in the MHSAA title games, and the NFL plays every day

You’re in Four Down Territory, where we break down four notes, nuggets, stats and trends from the weekend that was in Mississippi high school football, college football and the NFL.

Since Mississippi was the only junior college league in the country to play this season because of the COVID-19 pandemic, Northwest Mississippi (6-0) also claimed the 2020 national championship. MACCC commissioner Steven Martin presented the Rangers with the National Community College Football Championship trophy after the game.

The National Junior College Athletic Association, the sanctioning body for junior college sports in the country, plans to play a spring season in 2021 and award a separate national title.

“It feels great,” Northwest coach Benjy Parker said. “Everybody in our league had ups and downs with COVID-19, but our entire conference deserves a pat on the back for battling and making it through the season. I’m just proud or our team for getting this win.”

MACCC North Division Offensive MVP Michael Hiers finished 16-of-29 passing for 213 yards, a touchdown and no interceptions for Northwest Mississippi in the championship game. Sophomore tailback Jaquerrious Williams carried the ball 24 times on 109 yards and a touchdown.

Mississippi Gulf Coast committed five turnovers, including a fumble returned 50 yards for a touchdown by Jykeveous Hibbler and an interception returned 70 yards for another TD by Byron Pearson.

2
Six MHSAA football champions were crowned over the weekend — half of them in the final minute.

Oak Grove (Class 6A), Louisville (Class 4A) and Lumberton (Class 1A) all won their championship games by scoring touchdowns in the final minute of the game. Oak Grove and Louisville took it a step further by winning with do-or-die two-point conversions following their scores.

West Jones also took the lead for good early in the fourth quarter of its 33-27 win over West Point in the Class 5A championship game.

In the Class 6A championship game on Friday, Oak Grove drove down the field in the last 3 ½ minutes, scored on a 10-yard run by quarterback Kabe Barnett with 7 seconds left, and then won 29-28 when Barnett tossed a two-point conversion pass to tight end Trayvon Moore.

“I told the offensive coaches when we got the ball and if we score, we’re going for the win,” Oak Grove head coach Drew Causey told Mississippigridiron.com after the game.

On Saturday, Louisville scored on a 24-yard touchdown pass from Jace Hudspeth to Jarvis Rush to pull to within 14-13 in its Class 4A championship game against Poplarville. The Wildcats went for two and got it on a run by Jaden Triplett.

Triplett took a handoff and tried to go off left tackle. He was hit in the backfield, but broke the tackle at the 2-yard line, planted one hand in the ground, and made an off-balance lunge just across the goal line for the go-ahead conversion and ultimately a 15-14 victory.

Afterward, Louisville head coach Tyrone Shorter said he was inspired to go for the win after seeing Oak Grove do it the night before.

“I just felt it and had the confidence we could execute,” Shorter told Mississippigridiron.com. “We watched the 6A game last night and I believed in our offense and they executed.”

3
Alabama laid a beatdown of historic proportions on LSU on Saturday night.

The Crimson Tide won 55-17, posting the highest single-game point total by either team in a series that started in 1895 and has included 85 games. The previous high came in a 47-3 Alabama victory in 1922.

Alabama quarterback Mac Jones, who finished with 385 yards passing, had 338 yards and all four of his TDs passing by halftime. Wide receiver De’Vonta Smith had eight receptions for 231 yards and three touchdowns, and surpassed the 200-yard mark in the first half.

Alabama (9-0) clinched the SEC West title with the victory, and a spot in the conference championship game against Florida on Dec. 19 in Atlanta. LSU, meanwhile, inched closer to the kind of history it does not want to be a part of.

The Tigers (3-5) — who went 15-0 last season en route to winning the national championship — must beat Florida and Ole Miss in their last two regular-season games to avoid the program’s first losing record since 1999. LSU has won at least eight games in every season this century until this one.

If LSU loses either of its last two games, it will become the first defending national champion to have a losing record since Ohio State in 1943.

Because of World War II, the 1943 Ohio State team only returned one starter and five players from the 1942 national champions. LSU had four returning starters this season because most of the others were selected in the NFL draft.

4
The NFL schedule has had plenty of oddities in this COVID-19 influenced season, to the point that some of them are becoming common.

The Dallas Cowboys are set to play the Baltimore Ravens on Tuesday night in Baltimore. It is the second game this season that was postponed because of COVID-19 issues and then rescheduled on a Tuesday.

The Buffalo Bills and Tennessee Titans also played on a Tuesday in October. Last week, the Ravens and the Pittsburgh Steelers played on Wednesday afternoon, which was only the second time it had happened in NFL history. The Giants and Cowboys moved their 2012 season opener up one day to avoid a conflict with the Democratic Party National Convention.

Before this season, the last time a game was played on a Tuesday was in December 2010, when a snowstorm forced the Minnesota Vikings and Philadelphia Eagles to postpone a Sunday night game. Prior to that, the last Tuesday game had been in 1946 when the Boston Yanks and New York Giants postponed their Monday night season opener in September because of severe weather.

Barring another late cancellation, the rescheduled midweek games will make this the first season in modern NFL history in which a game has been played on every day of the week. There are Saturday games scheduled for Weeks 15 and 16, and the Saints and Vikings will kick off Week 16 on Christmas Day — a Friday — in the Superdome.

BIRMINGHAM, Ala. — For the second week in a row, Ole Miss will spend a quiet Saturday at home. The... read more