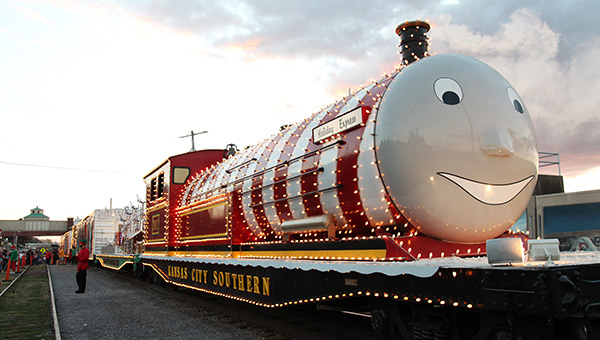 The Kansas City Southern Holiday Express lights up as the sun goes down near the Old Depot Museum during the train's visit to Vicksburg in 2012. (Justin Sellers/ The Vicksburg Post, file photo)

COVID-19 might have stopped the train, but it did not derail Kansas City Southern’s Holiday Express project.

The fundraising element of the annual Holiday Express program continues.

To date, $148,115 has been raised to benefit The Salvation Army in 20 communities along the railroad’s Class 1 network, including Vicksburg.

“I am very grateful that they are still doing the fundraiser and grateful we will be receiving it,” Salvation Army Major Janna Torgerson said. “I understand they can’t come in person like they normally do; that is something I will miss, but the fact they are still going out there and raising the funds for us is amazing because the need is still there and the opportunity to get these funds to Vicksburg means a lot.”

KCS officials announced in September that the company would launch the fundraiser to mark the Holiday Express program’s 20th anniversary. Last week, the company issued a challenge grant to raise even more, KCS officials said in a press release.

President and Chief Executive Officer Patrick Ottensmeyer said KCS will donate $2 for every $1 raised by the Holiday Express project, up to an additional $100,000, between Nov. 28 and Dec. 15.

While the funds will come in after the Salvation Army Angel Tree distribution, Torgerson said, it would still be used to pay for expenses related to the Angel Tree program.

“It will go straight toward things we have paid for with the Angel Tree,” she said, adding some of the money could possibly be used for the “last-minute angels.”

With fundraising still in progress, Torgerson said, she did not know how much funding the Vicksburg Salvation Army would receive.

During the 19 years, the KCS Holiday Express project has raised more than $2.1 million, which was donated to the Salvation Army at each scheduled Holiday Express train stop to help provide warm clothing and other necessities for children in need. The KCS Holiday Express was built on the tradition of the Santa Train that ran on a segment of the network bought by KCS in 1997.

After five days of searching, the families of two duck hunters who went missing on the Mississippi River are holding... read more