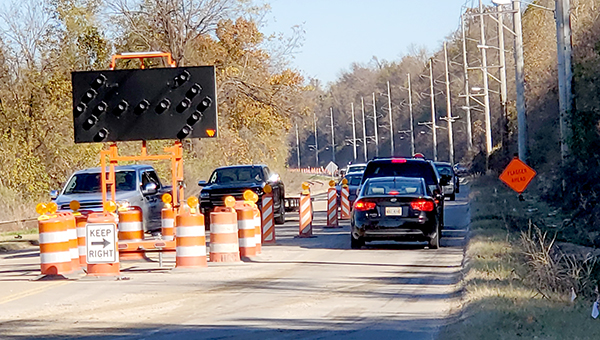 Drivers make their way through a construction zone on North Washington Street Tuesday. Work in the area is connected to the massive waterline project that is bringing an auxiliary waterline from the city's water plant to the downtown area. (John Surratt/The Vicksburg Post)

The Board of Mayor and Aldermen have approved a change order for the city’s auxiliary waterline project that will raise the project’s cost by more than $700,000.

Mayor George Flaggs Jr. said the $782,650 change order with contractor Hemphill Construction was made at the request of the city.

Flaggs said the money for the change order is in the project budget.

“We’ve got the money for the whole project,” he said. “If we didn’t have it we wouldn’t be doing the change order. We don’t do contracts without money being in the bank.”

He said the order also calls for lining the interior of a 24-inch sewer line “from manhole to manhole” so the waterline can be installed under the sewer line and tie it into the existing waterline near Rusty’s.

A date for the work has not been set, and Van Norman said the city will have to close Washington Street while the work is being done. Presently, the line is just south of the intersection of Main and Washington streets where the auxiliary and the main waterlines connect.

Flaggs said connecting the existing lines to the auxiliary waterline would allow the city to better provide water service to the city.

“We have multiple options to distribute the water off from there so you don’t have to shut down the city every time one or two of those (lines) go out,” he said, adding he believes connecting the lines will open some areas of the city.

The board awarded the waterline project to Hemphill in October 2019. The Florence-based contractor bid $5.030 million and was the lowest of five bids submitted for the project. It was one of four bids to come in less than the project’s estimated $6 million cost.

The auxiliary waterline starts at the city’s water treatment plant on Haining Road and goes south, running parallel to Washington Street. It will connect to the existing waterline at Washington Street in front of the Jesse L. Brent Lower Mississippi River Museum and Interpretive Center.

Flaggs said in July 2019 a crossing valve was installed on the city’s main waterline when repairs were made to the line in 2010 after it was damaged during the construction of the museum.

The mayor on July 12, 2019, signed an agreement with the U.S. Army Corps of Engineers Vicksburg District for $4.5 million in Water Resources Development Act Section 592 infrastructure program grant money to help cover the cost of the project. The city’s share of the project cost is $1.5 million.

Discussion about an auxiliary waterline began in 2010 when the city’s main waterline was damaged during excavation for the Corps’ Jesse Brent Lower River Museum and Interpretive Center.

In November 2010, the Board of Mayor and Aldermen hired IMS Engineers of Jackson to perform the engineering for the project. At that time, the city received a $2.45 million 592 grant and the project was estimated at $3.29 million, with the city’s share projected to be $841,821.

There was little action by city officials on the project after IMS’ hiring until November 2013, when Flaggs called a meeting of IMS representatives and city, Corps and National Military Park officials. By that time, the three-year delay had caused the project’s cost to nearly double.