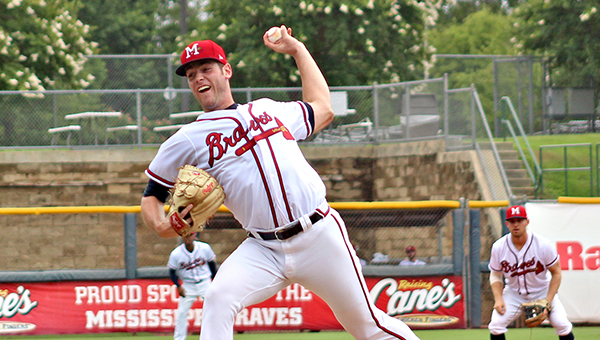 Mississippi Braves pitcher Joey Wentz throws in the second inning of a 2019 game against the Jackson Generals. The M-Braves announced Wednesday that they will remain as the Atlanta Braves’ Double-A affiliate for the 2021 season and beyond. (Ernest Bowker/The Vicksburg Post)

PEARL — The massive changes sweeping across the minor league baseball landscape will not directly affect the Mississippi Braves, the team announced Wednesday.

The Mississippi Braves announced in a statement that they have been invited to continue as the Atlanta Braves’ Double-A affiliate for the 2021 season “and beyond.”

The team is owned and operated by the Major League Baseball parent club Atlanta Braves, which is helping them weather Minor League Baseball’s radical realignment in the wake of the COVID-19 pandemic.

The entire 2020 minor league season and two-thirds of the Major League Baseball season were canceled because of the pandemic. Earlier this year, Major League Baseball announced plans to eliminate a number of Class A leagues and teams, and reconfigure some Double-A and Triple-A leagues. A total of 120 teams will be affiliated with MLB teams under the new alignment. The 120 remaining teams received invitations to return on Wednesday.

Among the teams that will be contracted are the Southern League’s Jackson Generals, who play in Jackson, Tennessee. Another, the Florida Fire Frogs, were a Braves’ Class-A affiliate.

The Atlanta Braves moved their Double-A affiliate to Pearl in 2005, and the team’s home stadium Trustmark Park was built at the same time. The current Atlanta Braves’ 40-man roster includes 23 players who passed through Mississippi on their way to the majors. A total of 150 M-Braves alumni have reached the majors.

“On behalf of the M-Braves, we are honored to be invited to continue as the Atlanta Braves Double-A franchise,” Mississippi Braves Vice President and General Manager Pete Laven said in a statement. “Since 2005, fans in central Mississippi have witnessed future major league talent on the diamond at Trustmark Park and we look forward to featuring the stars of tomorrow here in Pearl for years to come.”

In addition to the M-Braves, Mississippi’s other Southern League team also survived the Minor League Baseball realignment. The Biloxi Shuckers announced that they will remain the Double-A affiliate of the Milwaukee Brewers for the 2021 season.

The Shuckers have been Milwaukee’s Double-A affiliate since 2015, when they debuted in the brand-new MGM Park in Biloxi.

The Brewers’ other minor league affiliates will be located in Nashville (Triple-A), Grand Chute, Wisc. (High-A), and Zebulon, N.C. (Low-A).

“We are happy to continue the excellent relationship that has been developed with the Brewers,”  Shuckers general manager Hunter Reed said. “This invitation ensures we have an opportunity to maintain our long-term partnership in Biloxi with a familiar organization, and we are excited for the years to come.”