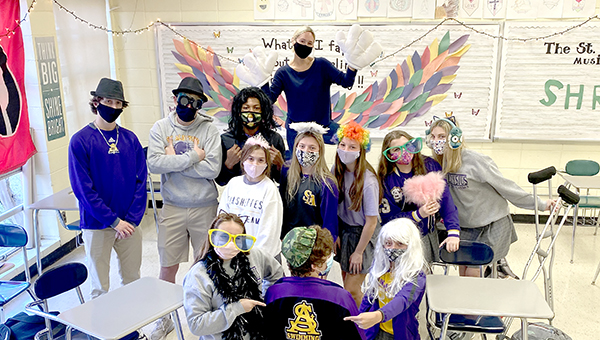 Chesley Lambiotte was born and raised in Vicksburg and attended Vicksburg Catholic School from start to finish. Now, she dedicates her career to the school that raised her.

Lambiotte, who is in her sixth year at Vicksburg Catholic School, teaches theology and performing arts, and coaches the Flashettes high school dance team. She was recently named the “Best High School Teacher” in The Vicksburg Post’s annual Readers’ Choice Awards.

“Teaching in a school that I grew up in is totally surreal. So much is the same — the feel, the smells, and even some of the people,” Lambiotte said. “There is a vibe here that I have never found at any other school. It’s hard to explain but the sense of faith and family has never changed. I think that’s why so many of us either come back or give back.”

After graduating high school, Lambiotte attended the University of Georgia and later moved to New York City, she said, “to further her education through performing.” She now uses this experience to further her students’ education and abilities.

“I consider it an honor and a privilege to come home and share everything I’ve learned with all my students throughout the years,” she said.

St. Aloysius senior Caton Blackburn has experienced Lambiotte’s impact firsthand. Blackburn grew up with Lambiotte as her dance teacher and family friend. The theater has always been a part of Blackburn’s life, and she credits Lambiotte for her love of the stage.

“Mrs. Chesley has always been an inspiring role model to me,” Blackburn said. “Being my dance teacher throughout elementary school, she taught me to love the stage at an early age.”

Lambiotte has taught a performing arts class at St. Aloysius for the past three years, and Blackburn has taken the class each year she has been eligible. Blackburn said Lambiotte challenges students to step out of their comfort zone, which helps them discover many hidden talents.

“She is amazing at pulling out everyone’s hidden talents and getting students involved in the musical,” Blackburn said.

Lambiotte does not stop after the discovery. She enjoys enabling students to use those talents in a positive way.

“By far, my favorite thing about being a teacher is watching the moment when one of my students finds confidence in themselves,” Lambiotte said. “Whether it’s on stage or in the classroom, I love being a part of the process where they find freedom in honing their God-given talents.”

Vicksburg Catholic School has always been a part of Lambiotte’s life, and today she contributes to giving current students that same experience.

“I can say that my family, faith, and the strong Catholic education I received at St. Aloysius have all contributed to any success I have achieved thus far. This faith journey with an education steeped in the arts has guided me to become a more spiritual, determined, and goal-oriented individual,” Lambiotte said. “Helping young people achieve their personal objectives and surpassing their own educational standard by cultivating faith, confidence, creativity, talent and love for the arts is what I hope to accomplish.”