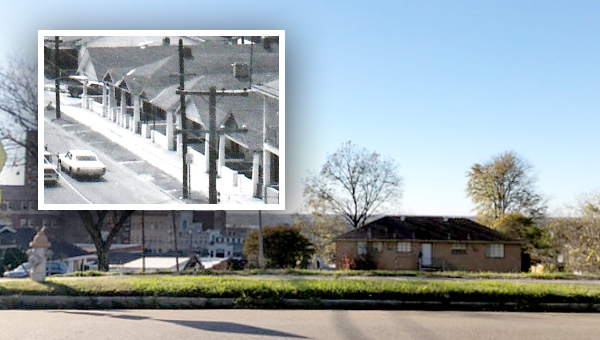 Cherry Street once featured a row of bungalows

The five bungalow residences that once lined 1112 to 1120 Cherry Street were built between 1923 and 1929 on the west side of Cherry Street, north of China Street.

They replaced four houses, three one-story and one two-story (on the corner of China), that had fallen into disrepair. The houses were most likely rental houses as the occupants changed quite often.

In 1923, 1112 witnessed the wedding of Mary Cornblatt to Leo Shoenholz. The house was Mary’s parents’ home and the vows were performed by Rabbi Sol Kory. The Cornblatt family must have been a popular one as the wedding was announced by both the Vicksburg Evening Post and the Vicksburg Herald on Feb. 14 and again on Feb. 15, and then by the Herald after the fact on Feb. 16, reporting that the couple had left for Chicago for their honeymoon and that they would reside in Cleveland on their return.

In 1929, these houses were occupied by Harry and Louise Meyers, Cora Heitman, Leon and Helen Graeber, Noel Freifeld and Julius and Lena Riegler. Harry Meyers was a clerk, Graeber was a tailor and Riegler was a salesman.

By 1935, 1112 and 1114 had new residents — Annie McInnis and John and Vesta Ramsey. Ramsey was listed in the city directory as a salesman for Wright Brothers Hardware Company and Vesta as a saleswoman at the Valley Dry Goods Company.

Annie McInnis was the widow of William and her sons Jack, who worked at Hill City Cleaners, and William, who was a civil engineer with Waterways Experiment Station lived, with her.

There were new occupants in the 1950s and 60s and the buildings were demolished in the 1970s.

The lot is vacant today and it is difficult to see how these five houses would even fit on the lot that remains.

The Board of Mayor and Aldermen have approved a change order for the city’s auxiliary waterline project that will raise... read more