Cook nears the end of his mile-a-day quest 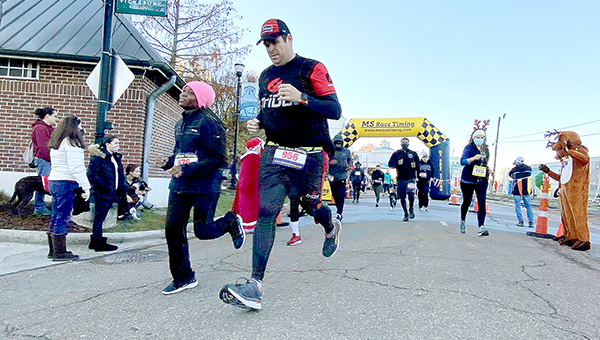 Adam Cook heads out from the starting line of the recent Reindeer Run 5K in downtown Vicksburg on Dec. 5. (Tim Reeves/The Vicksburg Post)

Late last year, Adam Cook was in a bit of an athletic rut.

He’s done Ironman triathlons and marathons but didn’t do much of anything after the running season concluded in November. Growing listless and, worse, fearful of falling back into the bad habits that had twice led him to spiral into morbid obesity, Cook set a new goal.

“I started New Year’s Day and said I’m going to go out and run a mile, and I’m going to try to run at least a mile every day this year,” he said.

Through heat and cold, wind and rain, in the early morning light and dead of night, Cook has done just that. He estimates he’s covered close to 700 miles through the first 350 days or so of 2020 and is closing in on finishing a yearlong quest.

“I figured I might make it a couple of weeks, maybe a month. I’ve been fortunate to keep it up. It was tough when it first started and getting back in the routine because I took November and December off last year and didn’t run at all,” Cook said.

Cook has battled obesity throughout his adult life. He weighed nearly 400 pounds before getting into shape in 2012 and 2013, but eventually gained all of the weight back and then some. He was up to 473 pounds when, in November 2017, he decided to have gastric sleeve surgery.

The operation removed most of Cook’s stomach and, along with a renewed commitment to exercise and healthy eating, helped him cut his weight in half to about 245 pounds. He finished two triathlons in 2019 and is an avid runner.

His time off late last year convinced him to set a new goal, however, of running a mile a day. Once the COVID-19 pandemic started in March, it replaced triathlon training as his primary mission.

“I didn’t run hardly at all in November and December after I did my Ironman last year. I just wanted to start back doing something and have a goal,” he said. “It’s been good because all of my Ironman races have been canceled this year so I haven’t had a lot to look forward to, racing-wise. This gave me something to keep me moving and doing something.”

Running a mile a day has taken not only commitment but also some creativity. He did a few of his daily runs on a treadmill when the weather was bad and wrapped a couple around the midnight hour. He quickly learned that while the latter might have made logistical sense, it did not turn out as well as he’d hoped.

“In January I did a couple where I went to Wyatt’s Gym and ran a mile at 11:45 on the treadmill, and then after midnight I ran another mile,” he said. “It’s still a mile a day, but then I’d get home and be wide awake and still be up at 2 a.m. and wake up at 5. I only did that about twice and decided that wasn’t the best approach for me.”

Cook has braved bad weather and minor illnesses to get in his daily mile. One thing he said he hasn’t done is “bank” miles, or run more than one mile per day and count it toward the next day.

“If my training plan had five or six miles today, I’ll run that and still run my mile tomorrow. I haven’t banked any miles. I run at least a mile every day,” he said, before adding with a laugh, “I picked a leap year to do it. Of all the years I picked to run a mile every day, I got a bonus day.”

Although, in the end, he has to find the self-motivation to run every day, Cook said friends and family have helped him. He posts daily updates on Facebook, which has led to people asking him about his progress. The peer pressure, he said, has spurred him along.

“People follow me on Facebook and I’ll see them around town and they’ll ask me, ‘Hey, have you run your mile today yet?’ Almost every day somebody will ask me. If nothing else I don’t want to let them down because I know somebody’s watching. So that keeps me motivated as an accountability partner,” Cook said. “And it feels a lot better in the morning to say I ran my mile, rather than, ‘Oh no! I haven’t done it yet.’ So I try to get it out of the way first thing in the morning because it’s easier that way.”

As he closes in on Day 366 of his quest, Cook said he does not plan to continue it indefinitely. He’s pondering a new goal for 2021 and hoping to get back into the triathlon circuit if races are held.

“I’m going to do something different next year. It gets kind of repetitious. I’m trying to come up with something to do the last day of the year as a thing to push it out there,” Cook said. “I probably won’t sleep in (on Jan. 1), but I’ll do something. I need to concentrate on my swimming more.”

What started as a goal in the distance is now within reach. Having kept it up, and seeing it near its end, Cook said, was satisfying.

“It feels good. When I got to a third of the year and then half of the year, I thought I might could actually do this,” he said. “I’ve been fortunate not to have an injury or anything. I’ve been under the weather a couple of times. I ran a mile on the treadmill with a 100-degree fever. I wasn’t feeling well, but I still did it because I didn’t want to disappoint myself. It only takes one day off and it’s done with.”