Southern Miss finishes the season with a win 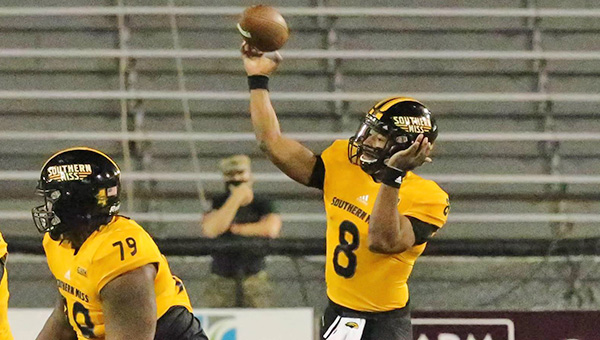 HATTIESBURG — With a flurry of big plays and some brute force in the running game, Southern Miss authored a happy ending to a dismal season.

Trey Lowe threw two touchdown passes and ran for a score, Camron Harrell returned a kickoff 100 yards for a TD, and Southern Miss beat Florida Atlantic 45-31 on Thursday night in the season finale for both teams.

Southern Miss (3-7, 2-4) had six plays of 20 yards or more, including two touchdowns, and finished with a season-high 514 yards of total offense. USM rushed for 333 yards.

“I think we kind of took the wheel a little bit and showed how prepared we were,” Southern Miss interim head coach Tim Billings said. “When we had 17 points, I laughed at one of the coaches and I said ‘If you had told me we could have 17 points in this game with their defense, I would have taken it.’ We end up with 45 so just a great job offensively by the offensive staff.”

Southern Miss (3-7, 2-4 Conference USA) went through three head coaches this season, and hired a fourth before it was over. Vicksburg native Jay Hopson resigned after a loss to South Alabama in the season opener. His interim replacement, Scotty Walden, left in October to become Austin Peay’s head coach.

Billings became the next interim head coach and led the Golden Eagles to a 2-4 record down the stretch. In addition to the coaching changes, Southern Miss had four games canceled or postponed because of COVID-19 issues, and Lowe was the third quarterback to start a game,

Before Billings passed the torch to Will Hall, who was hired last week, he praised the effort of his players for enduring a unique and challenging season.

“We took a team picture the other day and all of our rag-tag practice jerseys. We had black, and red and white, that’s how I wanted it. We looked like the Bad News Bears and that’s kind of how this year has been,” Billings said. “I’ve been doing this for 42 years. I don’t have any of those team pictures anywhere, this one I promise you will be up in my office wherever I’m at. This is a group I will always remember and a year I’ll always remember.”

Florida Atlantic (5-3, 4-2), the Conference USA champion last season, was eliminated from contention for the 2020 title. The Owls, who went into the game ranked No. 3 nationally in scoring defense (12.4), allowed more than 20 points for the first time this season.

“First time all season long where our defense had as many missed tackles as we did tonight. That was uncharacteristic of our defense. We gave up a lot of big plays, explosive plays for touchdowns,” FAU coach Willie Taggart said. “They had five series of 75-yard drives, whenever you play a team (that) drives on you five times for 75 yards, that’s not good.”

Lowe was 13-of-19 passing for 209 yards, with one interception and two TDs for Southern Miss. He added 70 rushing yards and a score on 16 carries. Freshman Frank Gore Jr. had 111 rushing yards, including a 73-yard touchdown in the first quarter.

Southern Miss turned the ball over on its first two possessions of the game — FAU converted one into a touchdown — but never trailed after Gore’s long touchdown run tied it at 7-7.

Tim Jones caught a 5-yard touchdown pass that capped a 13-play, 75-yard drive and gave the Golden Eagles the lead for good at 24-17 with 8 seconds left in the first half. Jason Brownlee scored on a 43-yard catch-and-run to give Southern Miss a 14-point lead nearly four minutes into the third quarter.

James Charles, who finished with 16 carries for 79 yards, scored on a 1-yard run to trim FAU’s deficit to 31-24. Harrell returned the ensuing kickoff for a touchdown, and then the Owls went three-and-out. But a lateral pass by Lowe bounced off its intended target and Armani Adams’ 43-yard scoop-and-score made it 38-31 with 54 seconds left in the third.

Southern Miss running back Kevin Perkins, who finished with 15 carries for 71 yards, capped the scoring with a 3-yard run with 4:55 to play.

Perkins’ touchdown finished a nine-play, 90-yard drive that took nearly 5 1/2 minutes off the clock. Every play on the drive was a run.