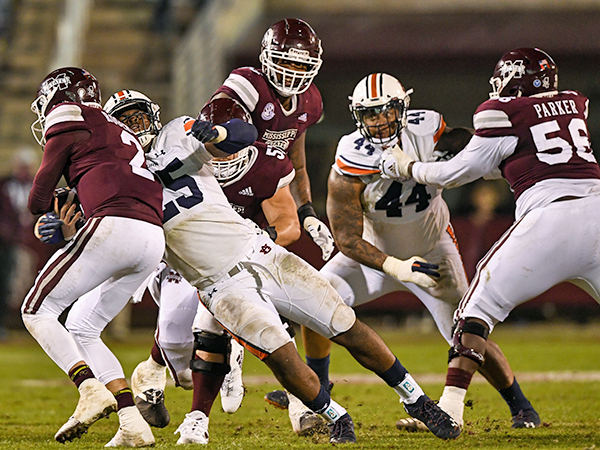 STARKVILLE (AP) — Bo Nix threw for one touchdown and ran for another to lead Auburn to a 24-10 victory over Mississippi State in its final regular season game of the year.

Auburn (6-4) put only field goals on the board in each of the game’s first three quarters, but Nix connected with Seth Williams early in the fourth to give the Tigers a 16-3 lead, then scrambled 3 yards to score again on the next possession.

“They take a lot of chances,” Auburn coach Gus Malzahn said. “They’re very unconventional. We knew they might get us some, but in the second half, with the game on the line, our guys responded. There’s a lot of positive energy out there, and it was good to win it the way we did.”

Mississippi State (2-7) continued to struggle offensively in head coach Mike Leach’s first season. The Bulldogs managed just 240 yards of total offense and did not score their only touchdown of the game until midway through the fourth quarter, on an 8-yard pass from Will Rogers to Austin Williams.

After opening its season with a surprise victory on the road over defending national champion LSU, Mississippi State has now lost seven of its last eight games. It finishes the season next week at home against Missouri.

“Nobody really thought when we started this season that we’d play Auburn that close,” Leach said. “So you guys were in for a pleasant surprise there.”

Most of the Tigers’ 345 yards of offense came from the ground. Tank Bigsby rushed for 192 yards and once again helped the Tigers control the game’s tempo.

“He runs violently, he breaks tackles,” Malzahn said. “I don’t think he’s 100 percent right now, and he still rushed for almost 200 yards against one of, statistically at least, the better defenses in our league.”

“This has been the longest season ever in my life,” Bigsby said. “It’s been a grind. A real grind to be honest with you. Nobody knows what all goes on inside, they only see the outside. But we got through it. We played 10 games. It was a hard year, but we got through it.”

Nix was 15-of-32 passing for 125 yards and added another 24 yards rushing. Anthony Schwartz and Eli Stove both caught five passes.

Jaden Walley had a game-high 100 yards receiving for Mississippi State. He set the school’s single-season record for receiving yards by a freshman, with 562, and had his third 100-yard receiving game of the season.

Rogers was 30-of-51 passing for 221 yards, a touchdown and two interceptions for the Bulldogs. Rogers became the first Bulldog quarterback to complete 30 or more passes in four consecutive games, although his streak of passing attempts without an interception ended at 177.

“We were able to make him uncomfortable,” Malzahn said. “We hit him. It looked like an Auburn defense out there.”