Lady Vikes shut out Missy Gators on the pitch 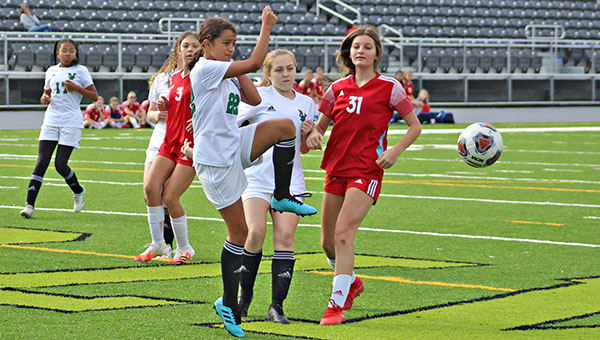 As they approached halftime of the 2020-21 soccer season, Vicksburg High and Warren Central both found some reasons for optimism on Saturday.

For Vicksburg, it was a competitive game against a rival that has dominated them in recent years. And, for Warren Central, it was a victory at the end of a long and exhausting week.

Warren Central (7-5) won its second consecutive game while playing for the third time in five days. It has two more next week before taking a two-week break for the holidays.

“This is our third game this week and, girls and boys, our legs were just tired. It was a good effort, but there just wasn’t a lot left. It takes its toll on their legs,” Warren Central coach Greg Head said. “We’ve got to work on our offense. We don’t see anything other than what’s right in front of us. We’ve got to go back to basics and working the ball on the front line. Other than that, they hustled but there just wasn’t much left.”

After Hall’s second goal made it 4-0, however, Vicksburg (3-3-1) took control of the game. It did not score and only had one shot on goal, but played most of the last 20 minutes on the attack rather than the defensive.

“We controlled the game,” Missy Gators coach Samantha Bailey said of the last 20 minutes. “I wish we could have gotten it up a little bit more, but still our girls were controlling it. Our defense stepped up and did their job.”

The final score, Bailey added, also showed improvement. Warren Central routed Vicksburg 7-0 in a preseason game in October and won for the sixth consecutive time against the Missy Gators. This was the closest meeting between the teams since 2016, however.

“The last time we played Warren Central, we lost 7-0. Today we came out 4-0,” Bailey said. “We had some coaching changes, so that’s been a big deal for our girls. They came out and did what we asked them to do, so even though it didn’t go our way it was still significantly better than we were.”