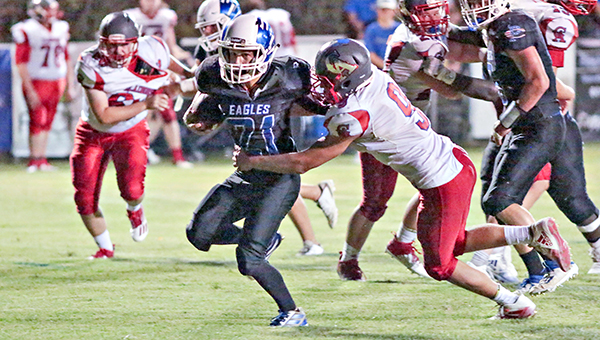 Porter’s Chapel Academy freshman Brayson Morson (21) was selected to the All-MAIS Class 3A team as an all-purpose player. (Walter Frazier/For The Vicksburg Post)

As a freshman, it’s easy to think that the best is yet to come for Porter’s Chapel Academy football player Brayson Morson.

Morson, who played running back, linebacker and returned kicks this season, was selected to the Class 3A All-MAIS team as an all-purpose player on Monday.

Morson rushed for 457 yards and five touchdowns for PCA, and led the team on defense with 71 tackles. He is also a terrific open field runner who returned two kickoffs for touchdowns and averaged 31.7 yards per return.

Morson split time between PCA’s undefeated junior high team and the varsity. He was limited to only two quarters per game with the latter.

“It’s special regardless of the age you are, to be recognized as one of the top players in our class,” PCA head coach Blake Purvis said. “The possibilities are endless with him. He can do so many things and play so many positions on the football field. He is just now getting to the point in his life where he’s building muscle and getting stronger. If that continues the next three years, there’s no telling what he can accomplish.” 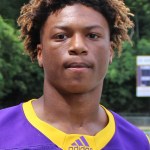 Williams also played running back and returned kicks. He led the Flashes in rushing with 722 yards and nine touchdowns, and had two kickoff returns for touchdowns. Williams played in the MAIS all-star game last week.

Briarfield Academy and Tallulah Academy, longtime rivals who played for a state championship this season, combined for nearly half of the 28 players on the Class 1A All-MAIS team.

Briarfield, which beat Tallulah 46-34 in the Class 1A championship game, had five players on the All-MAIS team as well as three award winners.

Beau Travis was selected as the Class 1A Coach of the Year after leading the Rebels to their third championship in four years. Linebacker Crews Fortenberry was the Defensive Player of the Year, and quarterback/defensive back T.J. Baker was the overall Player of the Year.

Fortenberry, a senior, led Briarfield’s defense with 141 total tackles in 12 games. He had six sacks, 26 tackles for loss, one interception and two forced fumbles.

Baker passed for 1,434 yards and 23 touchdowns, with only five interceptions in 141 attempts. He also ran for 1,995 yards and 25 touchdowns, and racked up 492 total yards and six touchdowns in the championship game against Tallulah.

On defense, Baker ranked second on the team with 77 total tackles and three interceptions.