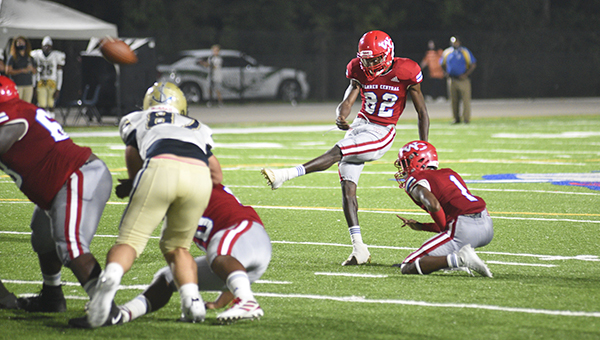 You’re in Four Down Territory, where we break down four notes, nuggets, stats and trends from the weekend that was in Mississippi high school football, college football and the NFL.

1
Mississippi’s high school football season has come to an end, but the all-star season is in full swing.

Alabama snapped a three-game losing streak behind McKinstry, a University of Alabama commit who also caught three passes for 76 yards.

The Mississippi-Alabama game was the third of four all-star games this season. The Mid-South Association of Independent Schools played its all-star games on Dec. 4, and the Bernard Blackwell All-Star Game featuring Mississippi’s all-stars is Saturday at 1:30 p.m. at Brandon High School.

Warren Central kicker Josh Griffin will play for the North All-Stars in the Bernard Blackwell game. It’s the sixth time in seven years that a Warren Central player has been selected to play in the Mississippi All-Star Game.

Griffin is the only kicker or punter on the North roster. He made 16 of 17 PAT attempts this season, as well as 4 of 8 field goal tries, and recorded 16 touchbacks on 26 kickoffs. He averaged 36.1 yards on 21 punts.

“It’s all glory to God. I’m thankful and humble and ready to go against new competition and see what’s out there,” Griffin said. “I’m just looking forward to the experience.”

2
Former Clinton High School star Cam Akers is starting to show the kind of potential that made him a second-round pick in last April’s NFL draft.

Akers recorded the first 100-yard rushing game of his young career in the Los Angeles Rams’ 24-3 victory over the New England Patriots last Thursday. He carried the ball 29 times for 171 yards, marking the second game in a row he has led the Rams in carries.

Akers had 21 carries for 72 yards and one touchdown the previous week, in a 38-28 victory over the Arizona Cardinals. The week before that he had nine carries for 84 yards and a TD in a 23-20 loss to San Francisco.

Akers only topped 10 carries twice in the Rams’ first nine games, and missed two of those with various injuries. For the season, he has 528 yards and two touchdowns, and nearly half of his 109 rushing attempts have come in the last two weeks.

“It’s just (great) watching that guy really assert himself as a big-time player for us,” Rams head coach Sean McVay said after the win over New England. “You can just see this guy is going to be a really special player for us, and this was a great night for him.”

3
The New Orleans Saints not only lost for the first time in nine games, 24-21 Sunday to the Philadelphia Eagles, they saw a record-setting streak come to an end.

Philadelphia running back Miles Sanders rushed for 115 yards and two touchdowns, and quarterback Jalen Hurts ran for 106 yards in his first career start. They were the first players to run for more than 100 yards against the Saints in more than three years.

The last time the Saints had allowed a 100-yard rusher was Nov. 19, 2017, when Washington’s Samaje Perine gained 117 yards on 23 carries. It took an NFL-record 55 games, including the regular season and playoffs, for the Saints to allow another player to surpass the century mark.

“I think some of it was we had a couple more designed runs with Jalen. And then just, the style of run plan that we put together,” Eagles head coach Doug Pederson said. “We kept it to where we could have more probably repeat plays and just execution with the guys up front. Guys did a nice job there, and it was fun to watch them out there play and get this win today.”

4
One of the major side effects of the 2020 COVID college football season has been a large number of freshmen and sophomores seeing increased playing time for several Southeastern Conference teams as upper classmen have either opted out, been injured, or missed games because of positive COVID-19 tests.

LSU head coach Ed Orgeron said 26 of the 48 players who played in last weekend’s 37-34 victory over No. 6 Florida were either freshmen or sophomores.

Ole Miss has played 19 freshmen, including two starters, and six of them have played in all eight games. Several sophomores, including quarterback Matt Corral and running back Jerrion Ealy, are playing starring roles.

“Anytime you play young guys it’s tough for the present and exciting for the future. The exciting part is it’s like being on a roller coaster. You see somebody do something that you never thought they could do and that they couldn’t do a week ago. But the other thing is you’ll see someone do something dumb or some fast guy who is even further away from the ball because he went the wrong direction,” Leach said. “Fast guys, when they go the wrong direction, are farther from the ball than slow guys. You want them to be fast guys, but you want them to be near the ball. You’ll see some mind numbing stuff where you hit your head and say, “What did I just watch? What was he thinking?” And you’ve got to get it all reined in. We’re in that process with a lot of guys.”

As a freshman, it’s easy to think that the best is yet to come for Porter’s Chapel Academy football player... read more