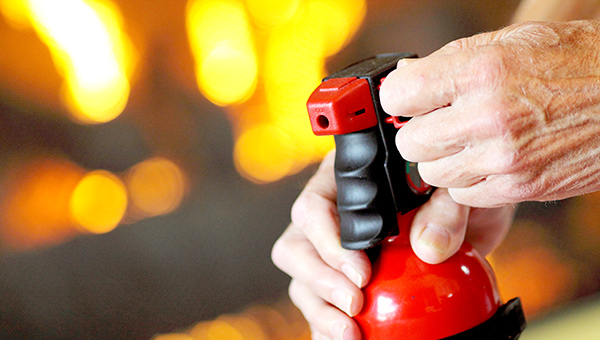 With the first day of winter rolling in, and cooler temperatures now affecting Warren County, residents are beginning to take steps to ensure their homes stay warm.

In doing so, local officials say people need to be careful when using appliances and equipment to heat their homes and be aware of the potential for fire if proper precautions are not exercised.

The first step in ensuring homes are safe, officials say, is to have one important item.

“The biggest thing, no matter what time of year, is to make sure they have a working smoke alarm in their house, preferably in every sleeping area of the house and the kitchen,” Warren County Fire Coordinator Jerry Briggs said.

Another item people should consider, Vicksburg Fire Chief Craig Danczyk said, is to have a fire extinguisher, which can be purchased for $20 or less.

When people consider how they plan to heat their homes for the winter, they have a range of choices, from fireplaces to furnaces, and central heating to space heaters.

“This is the time of year to be smart with your heating. If you’re using gas appliances like a fireplace or whatever, make sure you have a carbon monoxide alarm and don’t use your stove to heat your house,” Briggs said.

Electric space heaters, he said, should be plugged directly into the outlet.

“Don’t use an extension cord and keep them at least 3 feet from combustible curtains, blankets or carpet,” Briggs said. The same precautions should be used with gas space heaters.”

“What we see is sometimes people take shortcuts,” Danczyk said. “You may have someone who may not be able to afford a high electric bill so they take a space heater and put it close to the bed, and bad things happen. The covers fall off the bed and over the space heater on the floor and a fire occurs, or a pet gets tangled on a cord and turns it over and sets the carpet on fire.”

Space heaters, Danczyk said, are something people should pay attention to. He said there are new ceramic-type heaters that are safer.

“They may have some features with auto shut off, where they turn off if they’re knocked over. Older space heaters are more likely to cause a fire because of the age or condition,” Danczyk said. “If you have a space heater that’s 30 years old, the cord may be in bad shape. It may just not be a safe device.”

People also need to be aware of overloading electrical outlets. Plugging too many devices into an outlet and using substandard products like cheap extension cords with appliances that use a lot of energy, such as air conditioners and space heaters, create fire hazards. People also need to remember to turn appliances off.

“When you’re done with something it’s best to unplug it,” Danczyk said. “Pay a lot more attention to turning things off when not in use. Little things can make a difference.”

If someone uses a fireplace for heat, Briggs said, they should have it cleaned by a certified chimney sweep.

Also, he said, people should burn only hardwood — oak, ash and pecan — and no softwoods or pine.

Danczyk said he is seeing fewer wood-burning fireplaces since newer homes are using central heating and fireplaces with gas logs. When gas logs are used it is essential, he said, to have a carbon monoxide alarm.

If a house has central gas heat, it needs to be well ventilated.

Also, Danczyk said, people should avoid using candles and open flames for lighting because of the potential for fire.

“They should use LED lights which are brighter and safer,” Danczyk said.

When Jammin’ for the Kids was first organized 22 years ago, it became an immediate success. The fundraiser, which benefits... read more