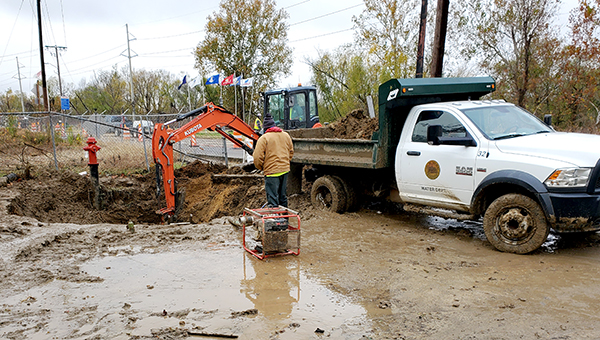 A broken sewer line may change the cost of positioning the city’s auxiliary waterline to connect with the existing main line.

Lining a 24-inch sewer line from “manhole to manhole” was part of a city-requested $782,650 change order approved Dec. 10 by the Board of Mayor and Aldermen.

But Public Works Director Garnet Van Norman said Wednesday the pipe will not be lined. It is broken and will have to be replaced.

He said Sunbelt, the contractor hired by the city to map and assess the city’s sewer lines, discovered the damage when it was “lamping” or running a video camera through the line.

“It’s collapsed all along the top of it (the line),” he said. Because the change order called for lining the pipe and not a new sewer line, he said, there may need to be another change order for the pipe.

Van Norman said he did not know how much line will need to be laid, “but I know (at least) 70 feet will have to be re-laid.”

Besides the sewer line, the change order also called for project contractor Hemphill Construction of Florence to tie-in five 8-inch waterlines on Washington Street that were closed to be connected to the new line so the waterline can be installed under the sewer line and tie it into the existing waterline near Rusty’s.

City crews Wednesday were excavating a collection of city utility lines to determine where the city’s new auxiliary waterline will pass as it nears its connection with the existing main line.

A city utility department crew was digging to the pipes on North Washington Street near 1st East Street to determine the pipes’ location on the ground.

“What they’re doing is determining the elevation of the pipes,” Van Norman said Wednesday. “We’re trying to determine whether to go over (the lines) or under. Most of the time we want to go under.”

As city workers looked for the lines, crews for Hemphill construction were preparing North Washington and First East Street to lay the final lengths of pipe to connect with the existing main waterline.

No date has been given when the lines will be connected.