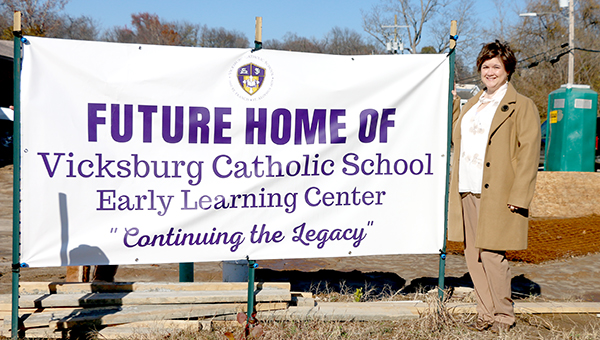 For more than 20 years, the Vicksburg Catholic School has hoped to one day open an early learning center.

In the spring of 2017, progress was made toward this effort when a committee was formed to discuss taking action, director of development and alumni affairs Kristi Smith said.

In the fall of 2018, ground was broken for the facility on Howard Street and construction began in the spring of 2020.

Now, with the building nearing completion, the dream is finally becoming a reality. Thursday, the administration of VCS, with the support of the Catholic Diocese of Jackson, announced Katie Emfinger will become the director of the Sisters of Mercy Early Learning Center.

“I am very excited and blessed to have the opportunity to work in this position,” Emfinger said. “When I came to Vicksburg Catholic School, it became more than a school. It became a family where we grow in our faith in God and one another.”

While at VCS, Emfinger has served as a teacher, Title 1 resource teacher and assistant director of the VCS After School Care program.

Prior to her coming to VCS, she taught in the Vicksburg Warren School District, where she was grade level chair for third and fifth grades. Emfinger was named Teacher of the Year at Warrenton Elementary School in 2010. Also in 2010, she received her National Board Certification in Education, and from 2013 to 2014 she was the lead teacher at Redwood Elementary.

In a letter sent from the VCS administration to teachers and parents of VSC, announcing Emfinger as the new director of the Sisters of Mercy Early Learning Center, it also noted Emfinger’s philosophy of education, which includes, “teaching the whole child; body, soul, spirit, and mind.”

Information for online registration information for the Sisters of Mercy Early Learning Center will be available in January and enrollment is planned for late spring and early summer.

Authorities continued scanning of the Mississippi River Thursday but failed to find anything as the search for two missing duck... read more