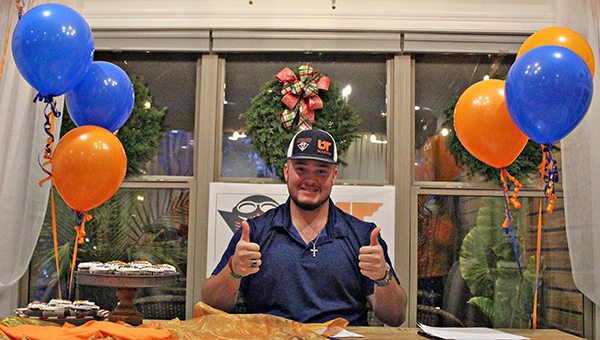 On Tuesday night, Ethan Boyd’s family was filling their home with the green and gold colors of Arkansas Tech. Then, at the last minute, they had to do some redecorating.

Boyd, who spent the last two seasons at Hinds Community College, flipped his decision on the eve of national signing day and took a Division I offer from Tennessee-Martin. On Wednesday evening, surrounded by orange and blue balloons and cupcakes, he put pen to paper and became a Skyhawk rather than a Wonder Boy.

Boyd said the chance to play at a Division I program — Tennessee-Martin plays in the Football Championship Subdivision, while Arkansas Tech is a Division II program — was the deciding factor.

Boyd also had offers from Northern Michigan, Virginia-Wise and West Alabama, all of which are Division II programs.

“Growing up, I was watching my sister and she had the chance to go and got in a bad wreck. I promised myself one day that if I had the opportunity to go D-I, I’d take it,” said Boyd, whose sister Mikala was an MAIS basketball all-star at Copiah Academy. “Last night, (Tennessee-Martin offensive line coach Kevin) Bannon and the head coach (Jason Simpson) called and they said, ‘We want you.’ I said I’m there. Just a chance. That’s all I needed was a chance.”

Boyd was one of three Hinds players who signed with four-year programs on Wednesday, the first day of the early signing period. Defensive end Jaylen Heffner signed with Delta State and quarterback Kobe Dillon with Southern University.

Boyd graduated from Copiah Academy in 2019, but has plenty of family in Vicksburg and signed his national letter of intent in front of them in the River City. He started at right tackle this season and was selected to the Mississippi Association of Community Colleges Conference’s All-South Division team.

Boyd said his time at Hinds prepared him well to move on to the next level.

“Hinds was the only offer I had, but it was one of the best offers I could get,” he said. “It was family there. It’s very rewarding. COVID didn’t help a lot, but having this opportunity, it’s all to God.”

Tennessee-Martin plays in the Ohio Valley Conference, which shifted its season to spring 2021 because of the COVID-19 pandemic. Boyd will be able to practice with the team, but cannot play in the spring season. He will have three years of eligibility left beginning with the fall 2021 season.

Boyds wasn’t sure exactly which offensive line position he would play, but said he was willing to play anywhere.

“Either right tackle, left tackle, wherever they need me,” he said. “I’m just ready to start rocking and rolling.”