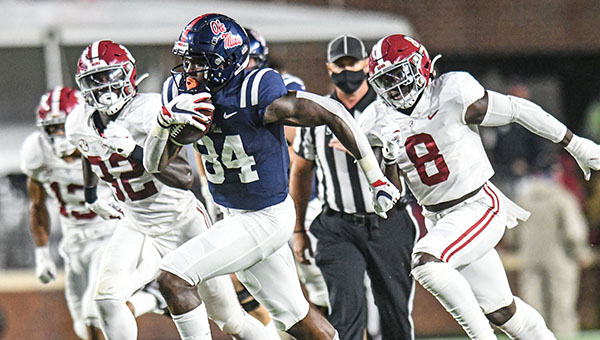 Ole Miss tight end Kenny Yeboah (84) is chased by Alabama defenders after catching a pass. Yeboah and Ole Miss teammate Elijah Moore, two of the team’s biggest offensive threats, announced Thursday that they will skip the remainder of the season to begin preparation for the 2021 NFL draft. (Bruce Newman/Ole Miss Athletics)

OXFORD — Ole Miss will be without two of its biggest offensive stars for Saturday’s regular-season finale against LSU.

Wide receiver Elijah Moore and tight end Kenny Yeboah have elected to forgo the remaining games of their college careers in order to begin preparation for the 2021 NFL Draft, it was announced Thursday.

Ole Miss (4-4) will play LSU (4-5) Saturday afternoon in Baton Rouge. Ole Miss could also be selected to play in a bowl game.

“While we’re disappointed that Elijah and Kenny won’t be joining us at LSU and our bowl game, we are excited about their future at the next level and how they will represent Ole Miss in the NFL,” Ole Miss head coach Lane Kiffin said. “We appreciate them helping launch this program to a championship level, and we wish them the very best in their growth as both players and men.”

Moore, a semifinalist for Biletnikoff Award, currently leads the country in receptions (86) and ranks No. 2 in receiving yards (1,193). He ranks No. 14 nationally with eight receiving touchdowns and No. 11 in all-purpose yards (158.3 ypg). No other SEC receiver had ever tallied as many receiving yards through the first eight games of a season.

In the Ole Miss career season record book, Moore finishes tied for third in receptions (189), No. 4 in receiving yardage (2,441) and No. 6 in receiving touchdowns (16). He is the only Rebel in school history to surpass the 200-yard receiving mark three times in a career, all of which came in 2020.

Yeboah has hauled in 27 catches for 524 yards and six touchdowns in his lone season at Ole Miss after transferring in from Temple.

“This year has been a roller coaster, from football almost being canceled to sitting at home for months in hopes the season happened. I remember being home during this span, and everyday I would work really, really hard in hopes of being presented with an opportunity to showcase my abilities. And for the I am forever thankful God blessed me with eight opportunities to go out and showcase my abilities to the world,” Yeboah wrote on Twitter. “Some days , I would really have to pinch myself to think, wow I am really a starting tight end in the SEC. Never did I take this for granted. My time at Ole Miss was one that I will never forget.”