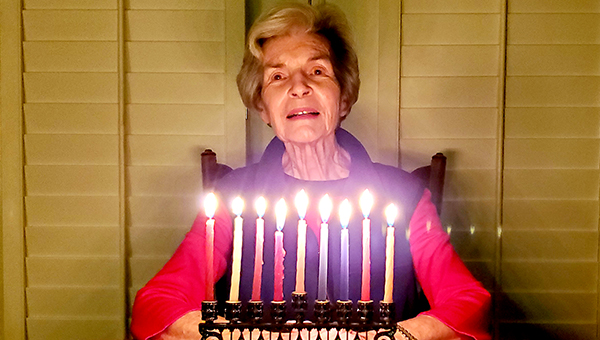 Vicksburg’s Jewish community in the midst of celebrating Hanukkah

Last week, members of Vicksburg’s Jewish community joined other members of the Jewish faith worldwide to remember a miracle.

The eight-day observance of Hanukkah that began Dec. 10 and ends Friday commemorates the rededication of the Second Temple in Jerusalem after the Jews rose up against their Greek-Syrian oppressors in the Maccabean Revolt.

According to legend, Judah Maccabee led the Jews and used guerilla warfare tactics to expel the oppressors.

The Jews cleansed the Second Temple and rebuilt its altar.

“When they finished cleaning, they needed a lamp that would burn continuously but they did not have the special oil,” said Julius Herscovici of Vicksburg. “They found a small amount of oil. They lit the oil and the lamp burned for eight days until more oil was made. This is the reason we celebrate for eight days.”

Herscovici, who is from Romania, said there are two other unique facts about Hanukkah.

And, he said, it is the only non-religious Jewish holiday.

There is one other bit of information.

According to the website History.com, Hanukkah in some areas of the country has generated a lot of commercial attention in part because it is so close to Christmas.

But while it seems to generate a lot of interest — there are 56.7 million results for Hannukah on Yahoo! — it is not considered a major event on the Jewish calendar.

of “It is a very minor holiday,” Ann Gerache said. “It does not, in any way, compare to Passover or the Jewish New Year or Yom Kippur. It just happens to come at Christmastime.

“It started as a Jewish tradition our children could observe while our Christian friends were getting ready for Christmas,” she said.

The Hanukkah observance centers around lighting the menorah. A candle is lit each night to remember the eight nights of the legend and prayers are usually said as the candles are lit.

Foods like potato pancakes called latkes are fried in oil and other sweets are served. Games are played and gifts exchanged.

The celebration, with its games, gifts and foods, Herscovici said, centers on children. “The heroes of this celebration are the children,” he said.

“It’s the story we try to keep going and they feel like they (children) have something to celebrate,” Gerache said. “My children used to have a gift every night of the eight nights. It could have been a package of gum or a box of chocolates, but they got a gift for eight nights.”

It’s the gifts and sweets, Herscovici said, that help children remember the holiday.

“They’ll never remember if you put them through prayer, but they will remember something sweet,” he said. “I don’t remember all the holidays, but I remember this one; I was always looking for this one. As a child it was different. I remembered it by what I got.

“Ask me if I remember how they explained the importance of this and I don’t remember one word,” Herscovici said. “When I was an adult I went to the library and read some books and I learned about the story and its importance.

“One year when I lit the candles I saw my grandmother; another time my home.”

Dr. Gloria Butler took off her jacket, pushed up the sleeve of her sweater and sat down. Seconds later, she... read more