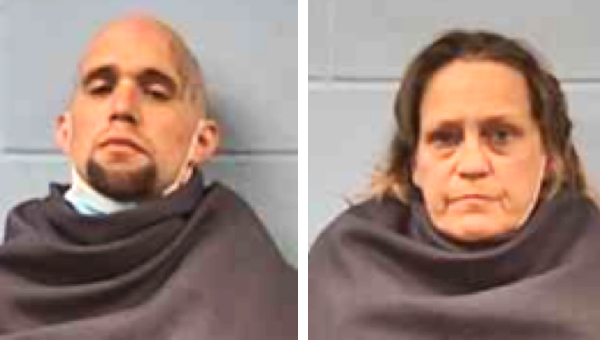 At around 11:30 p.m. Thursday, officers made a traffic stop, where they arrested both Nichole Warnock, 48, and Ernesto Crespo, 29, and charged them with possession of a firearm by a convicted felon.

During an initial court appearance Friday, both individuals received a $15,000 bond from Judge Penny Lawson and had their cases bound over to the grand jury.

• On Wednesday, at 12:32 p.m., officers responded to an address in the 300 block of North Poplar St. in reference to a burglary. The complainant reported someone broke into a residence and stole $600 cash.

• On Wednesday, at 8:13 p.m., officers responded to a report of an auto burglary in the 700 block of Belva Drive. A vehicle owner had caught a juvenile inside his 2012 Nissan Altima and called 911. The suspect was arrested and taken to the Warren County Juvenile Detention Center.

• On Wednesday, at 10:33 p.m., officers responded to the Five Star Convenience Store, 1108 Drummond St., in reference to a robbery. The complainant reported a man pointed a gun in the clerk’s face demanding the money from the cash register, taking $1,800.

A Greenville woman is in custody and charged with shoplifting stemming from a criminal shopping trip last weekend in Vicksburg.... read more