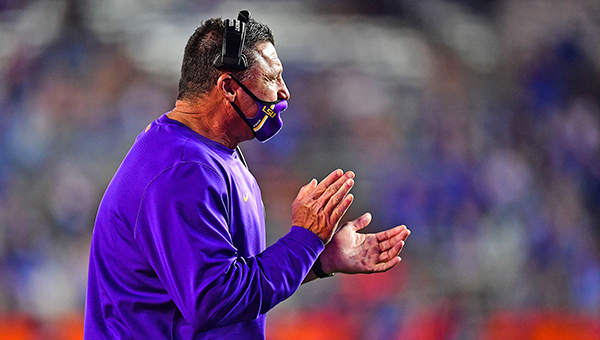 But Kiffin chose a path that returned him to the head coaching ranks, first at Florida Atlantic and then this year at Ole Miss.

Now they’re preparing to face off for the first time in an actual game — an end-of-season matchup Saturday at LSU’s Death Valley.

“In practice we used to go after it all the time,” Orgeron recalled. “We were very competitive, and I loved it. But, yeah, it will be the first time” to face one another as head coaches on opposite sidelines.

Orgeron and Kiffin met nearly 20 years ago as assistants on Pete Carroll’s staff at Southern California.

“Me and him recruited a lot of great players together,” Orgeron said. “We have a lasting bond.”
Kiffin called Orgeron a “great recruiter and great motivator.”

“I learned a lot from him,” Kiffin recalled. “Just watched how he worked.”

The Tigers seemed to be going in the wrong direction after consecutive losses to No. 5 Texas A&M and No. 1 Alabama — the latter by a score of 55-17.

But Orgeron rallied a Tigers squad decimated by injuries and opt-outs, and they stunningly upset then-No. 6 Florida in the Swamp last weekend.

“I think we’re all going to learn from having a week like we had last week where some teams or some men would have crumbled,” Orgeron said. “We decided to get stronger and fight.”

Ole Miss (4-4) has steadily looked stronger under Kiffin, who has the Rebels on a three-game winning streak.

Ole Miss now has a chance to finish the regular season with a winning record against an all-SEC schedule, which Kiffin said, “Would be pretty exciting in our first year to do — especially knowing that we let a couple of them slip away that we should’ve won.”

Ole Miss has not played since Thanksgiving weekend because of COVID-19 protocols that wiped out its game against Texas A&M, which had already been rescheduled once from earlier this season.

While Ole Miss still could go to a bowl, LSU already has announced a self-imposed postseason ban for this season in an effort to appease NCAA investigators probing recruiting violations from earlier this decade.

So Tigers players know they must win Saturday if they want to finish on a triumphant note, and avoid a losing season.

Meanwhile, Kiffin expects LSU’s victory in Florida to make them even tougher to play this week.

“I think that re-energized them,” Kiffin said. “It would’ve been a lot harder if you lose that game, you go back and are on whatever losing streak they would’ve been on. I’m sure that gave them a bunch of energy and they want to finish strong.”