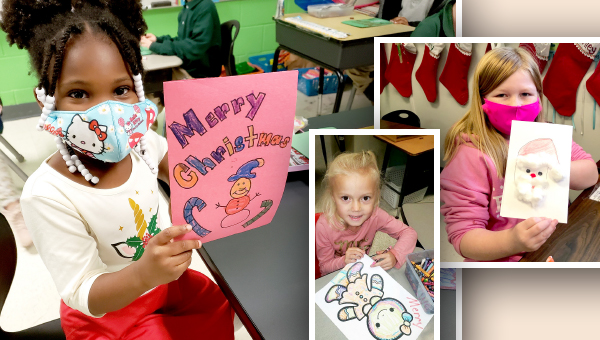 Aja Odom is a fifth-grade student at Bowmar Avenue Elementary School and she, along with others in the Vicksburg Warren School District, participated in a special project that is sure to put a smile on faces.

“I drew on the front cover a snowman and added cotton balls and put decorations with white snow on the ground and snowflakes on it, and I wrote a letter on the inside and at the end, I put a flip-up smiley face,” Odom said of the Christmas card she made as part of the Art from the Heart project, which was designed as an outreach project for nursing home residents.

No group has been affected more by the COVID-19 pandemic than those living in nursing homes.

Residents have been cut off from family and friends, and in some cases, these men and women have had to remain in their rooms because of the risk of contracting the virus.

Fortunately, a vaccine is on the horizon, but until it can be administered, nursing home residents must still remain in isolation from the public.

So with hopes of adding a bit of joy to their day, VWSD fine arts coordinator Nancy Robertson said every school in the district made Christmas cards to be handed out to them.

“Every principal wanted to jump in and wanted their schools to be involved in this,” Robertson said, and in the end more than 1,500 cards were made.

“This is going to touch them because this lets them know somebody out there still thinks about them and still loves them,” Shady Lawn activity director Felicia Robinson said of the cards that were to be delivered.

Robinson also thinks this will be a heartening experience, especially for those who will not be able to get around their grandchildren.

“They will say, ‘Oh a kid made this,’” Robinson said, and be reminded of their grandchildren.

Robinson said once the cards are deemed safe to enter the nursing home — they will have to sit out a while to make sure there are no lingering virus germs — they will be distributed to the residents.

“And after they have been read we will either hang them on the wall or some residents have scrapbooks,” she said.

Realizing nursing home residents are feeling “alone and sad,” Odom said, she was glad she got to participate in Art from the Heart, not only because she “loves” doing art, but because she was also doing something that would brighten someone else’s day.

“I hope (the nursing home residents) are excited for a card and happy, and I hope I cheer them up since they don’t get to see their family,” Odom said.