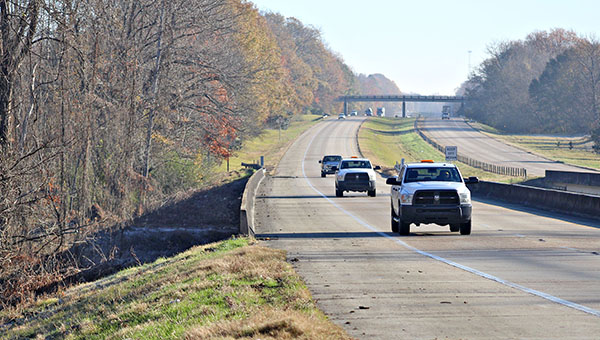 Vehicles pass over the Clear Creek bridge on I-20 westbound Friday morning. The Mississippi Department of Transportation recently awarded a contract for a maintenance project on the bridge. (Ernest Bowker/The Vicksburg Post)

Starting in January, travel along Interstate 20 in Warren County will be slowed for several months while workers with a Madison contractor repair an erosion problem at the Clear Creek bridge.

The Mississippi Transportation Commission has awarded a $735,451 contract to Key LLC of Madison, to fix the problem.

Mississippi Department of Transportation spokesman Mike Flood said erosion on the creek’s bank is causing a problem for the bridge and some other areas along the bank.

He said construction is expected to begin in early January. No timeline was given, but he said the work is expected to take a few months to complete.

Flood also said there will be some lane closures on both sides of I-20 once the contractor builds access ramps to the bank.

JACKSON — Trustmark has partnered with 69 organizations throughout its footprint in Alabama, Florida, Mississippi, Tennessee and Texas to support... read more