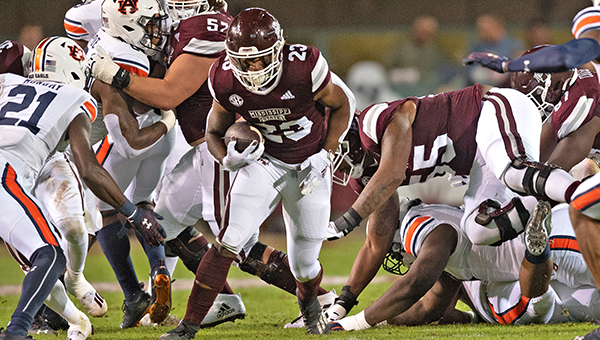 STARKVILLE (AP) — Missouri and Mississippi State are following the original plan to close the regular season against each other.

Saturday’s Southeastern Conference meeting in Starkville will be played two weeks later than scheduled in yet another upheaval caused by the coronavirus pandemic. Both teams have endured postponements, personnel challenges and adjustments during an emotionally trying fall, which makes reaching the 10th game of the league-only slate something of an achievement.

Even with the programs headed in opposite directions.

“Our guys have shown a lot of fight and resiliency and heart just to get to this point,” first-year Missouri coach Eli Drinkwitz said. “I think it’s taken a toll physically, and we have to find ways to get these guys back healthy on Saturday.

“It’s been a war of wills and I’ll say this: our will has been pretty strong. Some of these games could have gone another way.”

Last week’s 49-14 loss to No. 12 Georgia obviously wasn’t one of them, but the three-game surge preceding that setback demonstrates the strides the Tigers (5-4) have made under Drinkwitz.

Picked to finish sixth in the SEC East with projections of two or three victories, Mizzou is jockeying for its sixth SEC win for just the third time since joining the conference in 2012 and bowl consideration. The Tigers have been playing well and are looking for their third consecutive win against the SEC West since losing the opener 38-19 to top-ranked Alabama.

Mississippi State (2-7) aims to derail that quest and close an otherwise disappointing first year under Mike Leach on a high note.

Last week’s 24-10 loss to Auburn was the Bulldogs’ third in a row and seventh in eight games. They managed just 240 yards on offense, including a meager 19 rushing.

At the same time, State got within 16-10 midway through the fourth quarter before quickly yielding a 75-yard TD drive and two-point conversion that sealed the outcome. Leach nonetheless has seen progress for a squad that has turned to underclassmen because of injuries and player departures — not to mention, a season that has stretched into mid-December.

“Well, it means a lot to us all to get a win,” Leach said while lamenting the interruptions. “As a core team, this team, with a few exceptions, has never played together before. I think that they’re starting to play together better and better.

“I think that it’s constant improvement meets finishing the deal and having success together. We’ve been on the threshold of that against some really good teams for the last several weeks.”