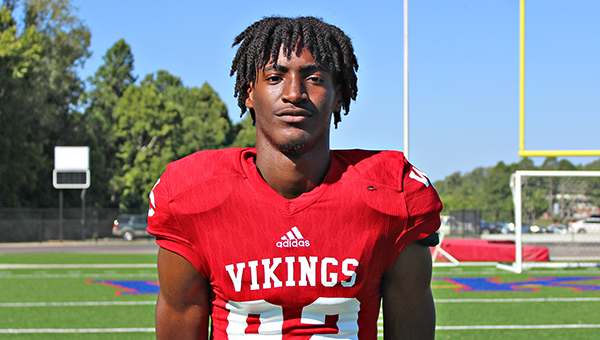 Warren Central kicker Josh Griffin kicked one field goal and one PAT for the North in the Bernard Blackwell Mississippi All-Star Game on Saturday.

BRANDON — Alan Follis threw for 125 yards and one touchdown, and the South All-Stars beat the North 16-10 in the Mississippi Association of Coaches Bernard Blackwell football all-star game on Saturday.

Follis, the quarterback for MHSAA Class 5A champion West Jones, completed 8 of 13 passes for the South, and also had 14 rushing yards. Follis’ 17-yard touchdown pass to Taylorsville’s Tyrese Keyes just before halftime gave the South a 7-3 lead, and it never trailed again.

Biloxi’s KrisShun Kendrick had the South’s other touchdown, on a 6-yard run late in the third quarter.

The North cut it to 16-10 on a 17-yard TD pass from Tupelo quarterback Jake Weir to Hernando’s Reid Flanagan with 6:46 left in the game, but got no closer.

The North turned it over on downs at midfield with 4:06 remaining and never got the ball back. The South finished the game with a seven-play drive that reached the 5-yard line before time expired.

Weir completed 13 of 21 passes for 105 yards and one touchdown for the Northm while Ridgeland quarterback Zy McDonald was 6-of-8 for 51 yards. Flanagan had three receptions for 54 yards and the one touchdown.

Warren Central kicker Josh Griffin booted a 26-yard field goal in the first quarter for the North, and also converted his only PAT attempt. He punted three times for an average of 28.0 yards as well.