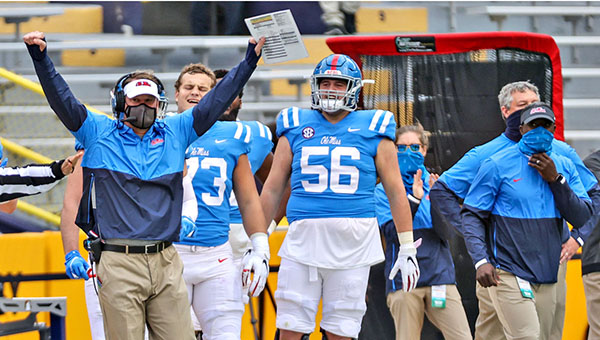 Ole Miss to face No. 7 Indiana in Outback Bowl

Ole Miss announced Sunday that is has accepted a bid to play in the Outback Bowl against No. 7 Indiana on Jan. 2 in Tampa, Florida.

It is Ole Miss’ first bowl bid since the 2015 season, when it beat Oklahoma State in the Sugar Bowl.

“Taking this team back to a bowl game is a good first step in our progression toward building a championship program,” Kiffin said. “We look forward to representing our university on this national stage against a top-10 opponent in Indiana. The Outback Bowl is a premier postseason destination, and I’m excited for our players to experience this trip.”

Kiffin added that playing in Tampa will be a bit of a homecoming for him. His father, Monte Kiffin, was the defensive coordinator of the NFL’s Tampa Bay Buccaneers from 1996-2008.

“Tampa is a special place for our family. My parents spent many years there, and I attended a number of games in the Big Sombrero when I was younger. It will be great to be back in the Bay,” Kiffin said.

Since the College Football Playoff era begin in 2014, Indiana (6-1) is the highest-ranked team not to be selected to a New Year’s Six bowl game.

The Hoosiers’ only loss came against No. 3 Ohio State, the eventual Big Ten champion, but the loss of star quarterback Michael Penix Jr. to a knee injury in late November hurt its cause for a more prestigious bowl bid.

This will be the first meeting between Ole Miss and Indiana in football, although their programs have some ties. Hoosiers head coach Tom Allen was the linebackers coach at Ole Miss from 2012-14. Defensive coordinator Kane Wommack, and several assistant coaches including Grant Heard, Jason Jones and Dwike Wilson also have previously worked at Ole Miss.

“It is a tremendous honor to play in the 35th Outback Bowl against a great opponent in Ole Miss,” Allen said in a statement. “Our players, coaching staff, medical staff and everyone associated with our team worked hard to navigate through this difficult season, and I am so happy everyone is getting rewarded for their efforts. Making our second-straight January bowl game shows where we are at as a program, and we are not done yet.”

Ole Miss (4-5) landed a spot in a traditional New Year’s Day bowl game despite a sub-.500 record and losing its regular-season finale.

The Rebels rallied from a two-touchdown deficit in the second half Saturday against LSU, only to lose 53-48 when Max Johnson threw a 45-yard touchdown pass to Kayshon Boutte with 1:30 remaining.

Corral also lost a fumble on Ole Miss’ final drive, inside LSU territory with less than a minute remaining.

“I was being a little too aggressive, not taking what they give me, throwing the ball blindly to the check-down, not being calm in the pocket, doing things out of the norm,” Corral said. “I take that loss across the chin. … That is on me.”

The turnovers offset an otherwise spectacular game for Corral and Ole Miss’ offense. Corral passed for 251 yards and three touchdowns, and led the team with 158 rushing yards and a touchdown.

“Usually, if you turn the ball over six (times) and you’re minus-five (in turnover differential), you’re not even in the discussion about winning, let alone being ahead in the fourth quarter,” Kiffin said. “Really a shame because we had ’em.”

In a normal season, a 3-7 record would not lead to much optimism in late December. This, of course, is... read more