All-County Football: Yet another great season makes Morgan the Post’s Coach of the Year 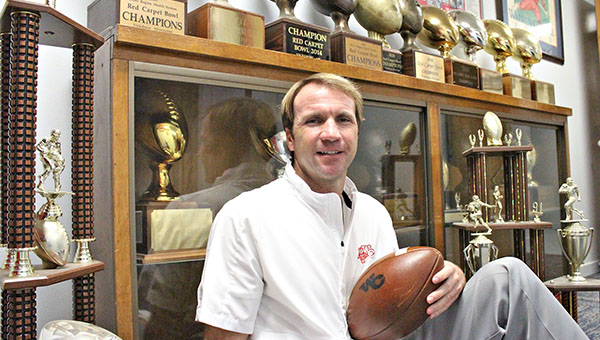 Warren Central’s Josh Morgan is the 2020 Vicksburg Post football Coach of the Year. It is the sixth time in 10 years that Morgan has won the award. (Ernest Bowker/The Vicksburg Post)

Success is not easy to come by in Class 6A in the Mississippi High School Activities Association. Sustained success is even harder to find.

There has not been a repeat champion in Class 6A since 2010, and eight different teams have won state titles in the past decade. The degree of difficulty in not only competing in the state’s largest classification, but producing a consistent winner, makes what Warren Central has done under head coach Josh Morgan all the more impressive.

Morgan led the Vikings to a 9-3 record this season — the ninth year in a row they have finished above .500 and reached the playoffs. The playoff streak is the third-longest in Class 6A, behind only South Panola (18 years) and Petal (13).

Warren Central’s sustained success has given Morgan consistency in another area as well. For the sixth time in 10 years he has been selected as The Vicksburg Post’s Warren County football Coach of the Year.

“I’m very proud of what we’ve been able to do, and by saying that I mean the consistency. Our program is elite. We’ve been able to keep playing big ballgames and stay in the playoffs and compete at a very high level in a tough district,” Morgan said. “I’m only a small part in it. A lot goes into this. I’m very thankful and proud of our seniors. This was a challenging year. I’m very proud of them for keeping us relevant and we had an opportunity to go a long way.”

The 2020 season, like it was for coaches across the state, might have been the most challenging yet for Morgan.

The COVID-19 pandemic that started in March wiped out the spring practice period and most of the offseason training program. For three months, players did not have any organized workouts or weightlifting sessions. When the Vikings finally started summer workouts in mid-June, their fieldhouse was under construction and they had to gather at the Vicksburg YMCA to lift weights.

The start of the season was delayed two weeks in August because of a spike in COVID-19 cases around the state, and there was plenty of uncertainty whether it would ever begin. Morgan credited the culture around the program for helping the team not only weather a difficult summer, but to come out of it ready to play and succeed.

“In the middle of the summer, with our seniors we didn’t know if we were going to be able to let them have a senior year,” Morgan said. “I’m thankful for our superintendent, principal and athletic director for giving those guys an opportunity to live out their dream and play their senior year. Boy, they made the best of it.”

Warren Central started 7-0, a record that included two forfeit victories over COVID-19 opt-outs Murrah and Greenville. It was ranked as high as No. 3 in the Associated Press Class 6A poll. The winning streak included two shutouts, and the defense allowed just three offensive touchdowns in five games on the field.

Senior defensive end Taylen Smith credited the winning culture built by Morgan and his staff, as well as a day-seizing mindset, for the success.

“The program we built around it, we went out and played every game like it was our last and it showed,” Smith said. “Even if they would have canceled the season at the midpoint, I think we felt well enough that we played our best throughout.”

Like he and his staff have done throughout the past decade, Morgan said the trick was figuring out a winning formula based on the players available. The Vikings had to replace several key starters on offense, and only scored more than 20 points in half of their games, but a staunch defense that made a half-dozen goal line stands and scored a few touchdowns of its own compensated for it.

Morgan smiled when he talked about the gritty approach that has come to define Warren Central football during his tenure.

“We had to be that way. We weren’t going to win any other way,” Morgan said. “We were going to be the tougher, more physical team, have a football savvy about ourselves, and love the man beside you. We bought in to that. It’s what we’ve hung our hat on for a while.”

Morgan has now entered his second decade at Warren Central, making him one of only eight football coaches in Warren County history to coach at one school for 11 years or more. Morgan is also taking his place as one of the most successful of the group.

Morgan now has a 75-57 career record at Warren Central, putting him in sixth place on the county’s all-time list. He’s only one win behind St. Aloysius’ Joe Edwards for fifth place. Since going 3-19 in his first two seasons when he was rebuilding the program, Morgan has a .720 winning percentage.

When he was asked about his name being mentioned among the county’s all-time great coaches, Morgan said it was humbling.

“I’ve grown up here, and to be knowledgeable of it and to know those guys and watching them, that’s really unique. What a great honor to be around that or even the question being asked,” he said. “I’m home grown and it makes it a little more special and unique. I have been very blessed. Our coaching staff is such a family, and I think that helps matriculate all through our program, our schools, the junior high and our community. It’s just a great thing and a great program to be a part of. We work and invest a lot in trying to be able to give our community something to be proud of, and fortunately we’ve been able to do that.”

Morgan, who is 41 years old, still has a long way to go in his career and plenty left to accomplish. No matter what the future holds, he said this will always be a special year that symbolized a lot of what he wants Warren Central’s football program to be.

“I really believe in what we’re doing, and probably saw it come to fruition moreso this year than ever,” Morgan said. “Bringing our kids together and our community together when we really needed sports. We needed something. This football team was able to come together. This is a special place. I love this community and I love this school.”