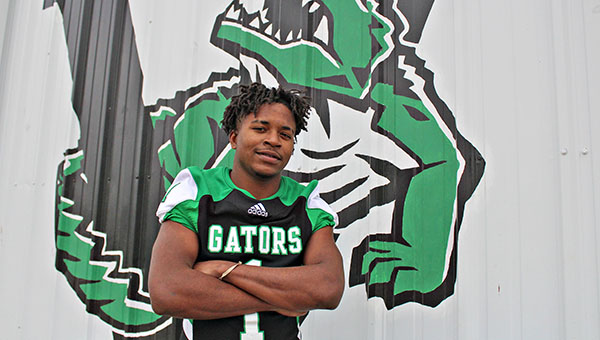 Vicksburg High running back Sha’Kori Regan is the 2020 Vicksburg Post Offensive Player of the Year. regan ran for 1,002 yards and eight touchdowns in only eight games. (Ernest Bowker/The Vicksburg Post)

Sha’kori Regan had big plans for his senior year.

He’d had a successful 2019 season and was growing into the role as Vicksburg High’s starting quarterback. He spent two months during the summer learning the intricacies of the new Wing-T offense and how to operate it effectively.

Then the plans changed. Regan broke his hand, forcing him to miss the season opener and most of another game. When he returned to the lineup, it was at fullback, not the glamour position of quarterback.

None of it fazed him.

Regan did wind up having the big year he dreamed about. He ran for 1,002 yards and scored eight touchdowns in only eight games. His 295-yard effort against Cleveland Central represented the best single-game rushing performance by a Vicksburg High player in more than 20 years.

Now that it’s all over, Regan is standing tall as The Vicksburg Post’s Offensive Player of the Year for 2020. He’s the fourth Vicksburg High player in five years to receive the award.

“Unselfish. Hey coach, whatever you need for us to win, I’ll do it. When a kid does that and buys in like that, you can’t help but respect it. That’s what men do,” Vicksburg High head coach Todd McDaniel said in describing Regan. “He bought in to it and went out there and had a tremendous year. I wish we would have done it (changed his position) Week 1. The young man came in, rolled up his sleeves and went to work. He has helped lay the foundation for something special.”

Regan said he took the on-the-fly position change in stride because it has happened before. He played linebacker and kicker early in his high school career, but was moved to quarterback before his junior season in 2019. Regan passed for 1,277 yards and 12 touchdowns, and ran for 686 yards and eight TDs.

“I’m used to being moved around,” Regan said.

When summer workouts for the 2020 season began in June, he had to learn how to run McDaniel’s Wing-T offense. He was getting a handle on it when he suffered the broken hand that caused him to miss the season opener against Warren Central and play only limited snaps in Week 2 against Biloxi.

Vicksburg was shut out in both games, and McDaniel made several lineup adjustments ahead of a Week 3 road trip to Natchez. The biggest was moving Regan to fullback, which gets most of the carries in the Wing-T. Regan said he was happy when he got the news.

“It really made me feel happy because I knew I was going to touch the ball a lot, and I wasn’t going to really touch it at quarterback,” Regan said. “I should have really been playing fullback since ninth grade, but they put me at quarterback and I stuck with it.”

His previous career high had been 169 yards in 2019 against Benton (La.), and it was the second-highest total ever for a Vicksburg High player. Only Caris London, who ran for a school-record 347 yards against Gentry in 1999, had more.

“It felt like I couldn’t be touched,” Regan said.

As the season went on, Regan became the workhorse back for the Gators. Carries were divided among several players, but he was the one carrying most of the workload between the tackles and getting hard yards when the team needed them.

Regan wound up as Warren County’s leading rushing by a wide margin — no other player had even 800 yards — and topping the 1,000-yard mark in a shortened season. He averaged 111.3 rushing yards in the games he played.

“I knew I was going to be better than I was last year, especially once I started playing fullback,” Regan said.

McDaniel praised Regan’s unselfishness, and said it was a big contributor to a big year.

“He’s an unselfish player. I wish I had him for two or three more years, but it doesn’t work out that way,” McDaniel said. “He rushed for 1,000 yards at fullback and never played it before, but if you just look at him he’s a natural running back. I hate to see him go. He truly bought in to everything we’re trying to do and now he’s receiving all the accolades for buying in.”