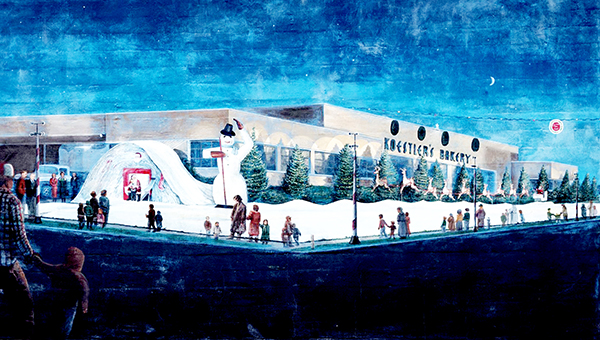 The majesty of Koester's Bakery at Christmastime is immortalized in the mural depicting the bakery among the Riverfront Murals in downtown Vicksburg.

Koestler’s Bakery at Christmas is a beloved memory for many

The following story appeared in the November/December edition of Vicksburg Living. For more information on Vicksburg Living or to subscribe to Vicksburg’s premier lifestyle magazine, call 601-636-4545.

Even though the iconic ambiance of Koestler’s Bakery has not been enjoyed in generations — 45 years now — the legacy of the Vicksburg mainstay lives on.

That legacy, which is far more than the luscious loaves of bread or special treats, is the feeling so many Vicksburg residents can vividly remember when the Christmas season begins to roll around.

Leo C. Koestler opened Koestler’s Bakery on Washington at Belmont Street in 1908. Bread cooked in coal-fired ovens was known as Mello-Toast Bread and delivered daily to homes by a horse-drawn dray. In 1918, the bakery became the first in the state to deliver in a motor truck, a Studebaker, to wrap and sell bread wholesale and to install a slicing machine.

In 1919, a new bakery was constructed at Washington and Bridge streets.

When Leo Koestler died in 1923, he left the business to his five children who continued their father’s tradition.

In 1949, the bakery moved to a new building at Clay and Hossley streets. That same year the family began the annual tradition of Christmas Tree Lane, the result of a belief in giving back to the community.

To begin with, the lawn outside the bakery was decorated with evergreen trees and then evolved into the more elaborate scene that became a must-see by residents and visitors alike each Christmas season.

“Oh, my children always had to go to see Santa outside the bakery,” Caroline Mendrop said during the 2008 unveiling of the mural. “Every year it was something they just had to do. Everyone went out there at Christmas time. There was a live Santa and, I remember, a snowman.”

In fact, the Christmas scene constructed outside the bakery became such a family tradition that it — Christmas Tree Lane — is immortalized in art as one of the popular Riverfront Murals in downtown Vicksburg.

A wooden Santa, sleigh and reindeer display that was once part of Koestler’s display remains and is displayed each Christmas season in front of Vicksburg City Hall, on the corner of Walnut and Crawford streets.

“We had big Christmases and we have so many memories of that bakery at Christmastime,” Jeannie Koestler, great-granddaughter of the bakery’s founder, said during the mural celebration. “Their bakery represented good, and the mural brings back memories to everyone involved, especially of my Mamaw and Papaw.”

The Whitaker’s home becomes a Christmas wonderland each year