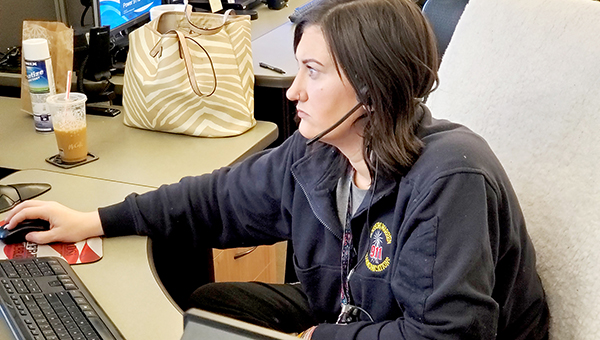 Whitney Porter, a dispatcher with Vicksburg-Warren 911 looks at her terminal during a recent shift. (John Surratt/The Vicksburg Post)

Friday morning, families gathered in their den or living room around a Christmas tree to marvel at the surprises Santa left and open gifts from relatives.

Later, they sat at a table fully graced with turkey or ham, vegetables, rolls and other dishes to enjoy a Christmas feast and share stories and tales.

But for the people responsible for keeping the Vicksburg and Warren County safe, Christmas Day meant spending time patrolling city streets and county roads, on standing ready at fire stations waiting for fire or medical calls, or in the hospital emergency room waiting to treat the illnesses or injuries that may come through the door.

For the dispatchers at the Vicksburg-Warren County 911 Communications Center, it meant handling the phones and consoles to ensure those who needed help on Christmas got it.

The county’s 911 dispatchers worked 12-hour shifts starting either at 6 a.m. Christmas or 6 p.m. that night as they cover the holiday weekend. And that meant the dispatchers and their families had to adjust their schedules to celebrate the season together.

“Most of our families know what we do and everybody will arrange their holiday meals or get-togethers,” said Steve Cunningham, the supervisor of the day shift working Christmas.

During Christmas, Cunningham said, volunteer groups bring food to first responders to help them observe the holiday while on duty.

“That helps so we don’t have to worry about putting something together while working,” he said.

Working holidays, Cunningham said, can vary as far as activity.

“A lot of times your holidays stay relatively calm,” he said. “But it’s one extreme to the other — there’s nothing going on or you’re going to be busy all day long. A lot of that depends on the weather because you have a lot of people traveling around.”

Holidays for emergency services, he said, are like any other day at work.

“There are going to be medic calls and heart attacks; wrecks, because more people are on the road, disputes between family members, so as far as the job goes, it’s just like any other day. The downside is you don’t get to be with your family on that holiday day.”

And there are what Cunningham calls “fireworks holidays,” holidays like New Years and July 4 when fireworks are commonly fired off.

“You may get more fire calls from fireworks going off, especially if it’s dry,” he said. “Trees catch fire from fireworks, houses — I’ve seen houses burn down because of fireworks.”

But the calls on Christmas, Cunningham said, are usually normal calls.

“If you stay on the same shift, you usually work every other holiday,” he said.

Cunningham, who has been a dispatcher for 12 years, has worked holidays on the night shift.

The nights, he said, are no busier than days on holidays like Thanksgiving and Christmas because almost everybody is doing travel and gatherings during the day.

He said working holidays is usually tough for people during their first or second year, “But after three-to-four years they get used to it; it becomes normal, you get used to it. You know early in the year and you make plans around it.”

Dispatcher Whitney Porter, who has been a dispatcher for two years, worked her second holiday shift.

“I was on night shift last year,” she said. “I worked Christmas Eve and got off Christmas morning at 6 a.m.”

Working her shifts has been a very big adjustment, she said, adding, “I’m the mother of six boys. I was at home for 11 years before going back to work after my children were in school. I went from not working to being a working mom. We’ve made it work.”

She said her youngest son “hates it, but the rest of my kids understand.” She said working her shift makes the time she spends with her children more precious.

“We try to squeeze as much time as we can, especially on long weekends like this weekend when it’s basically wake up go to work, come home, have supper, go to bed; and the same thing the next day. By the third day, I’m pretty much dragging.”

She said working the Christmas Eve shift in 2019 was the first-ever away from her children “and I missed a lot (of activities).”

This year, Porter began her shift at 5:30 a.m. Christmas and that meant getting her sons, ages 6 to 13, up early to do Santa.

“My kids are early risers anyway, so getting them up early to see what Santa brought was not a problem,” she said.

After she left for work, her sons spent the day with their father and grandparents. When she came home after her shift, Porter said, she continued celebrating the holiday with her family.

Cunningham said Porter’s and the other dispatchers’ situation is not unusual.

“It’s the same with anybody who has to work holidays, whether its nurses or doctors, firefighters, police officers, deputies — everybody who is in the same line of work. Families move around (the schedule) or you just miss out. Somebody has to do the job.”