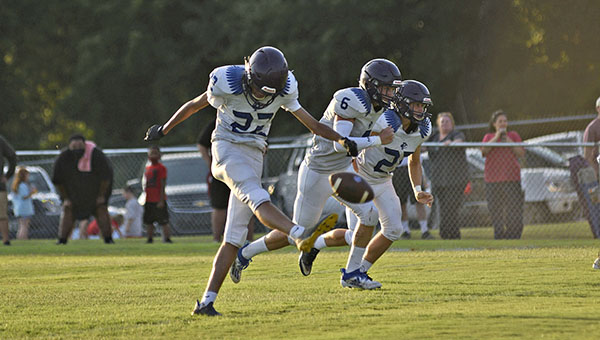 Porters Chapel Academy’s Daniel Llopis (22) kicks off against Benton Academy in August. The game was among the first to be played in the United States this season. (Courtland Wells/The Vicksburg Post)

With the publication of The Vicksburg Post’s 2020 All-County football team this week, it feels like we’re gently closing a book at bedtime.

The All-County team is the last chapter of the 2020 football season in Warren County. We compile the stats, recognize the best players, award a couple a place in history as the Players of the Year, and take one last look back at the year that was in high school football.
And what a year this was.

Eight months ago, we weren’t sure if we’d ever play a season again because of the raging COVID-19 pandemic. In June we took our first tentative steps toward normalcy with the belated start of offseason workouts. As the first games approached in August, uncertainty reigned as we all tried to figure out how to make it work as teams, players and fans.

Somehow, we did it.

Sure, there were games canceled, postponed and rescheduled on a daily basis. Some teams had their seasons end, sadly, with playoff forfeits forced upon them by a handful of positive COVID-19 tests. But by and large, we came through what was supposed to be a nightmarish fall, a fall without football or joy, relatively unscathed.

I’ll hold off on speculating on whether that was a result of caution, the nature of the virus, or blind luck, but it’s likely all three played some role. Whatever it was, we should be thankful to the athletes, coaches and administrators across Mississippi who pulled it off.

Those who don’t fully appreciate the life lessons we learn from sports often deride them as “just a game.” In 2020, more than ever, that was far from the truth.

This year, sports — and in particular high school football, which led the way in Mississippi — helped us climb back to our feet after a difficult spring and summer. It returned us to some sense of normalcy, gave us hope that we can pull through this, and reminded us that life does go on.

Sports often teaches us the lesson that it’s all about getting up when you get knocked down, and how to grit your teeth and fight through adversity. That even if you lose on one play, you can win the next one. All of those life lessons came shining through, again, this year.

When Porter’s Chapel Academy and Benton Academy became perhaps the first high school football teams in the country to start their season on Aug. 14, no one knew whether the season would last a week, a month, or go all the way through to the end. The answer, thankfully, was the latter.

So thank you all. Thank you to the administrators who laid out a plan to make it happen. To the coaches who changed years of ingrained training and thinking to adjust their practice routines and execute the plan. To the players — and not just football, but volleyball, softball, soccer and basketball as well — who showed courage just by stepping back on the field and playing the games that they loved.

You all showed us what we can do, and how to do it safely. There are plenty more chapters to this book that will be written in the months and years to come but, for now, we can close this one with a happy ending.