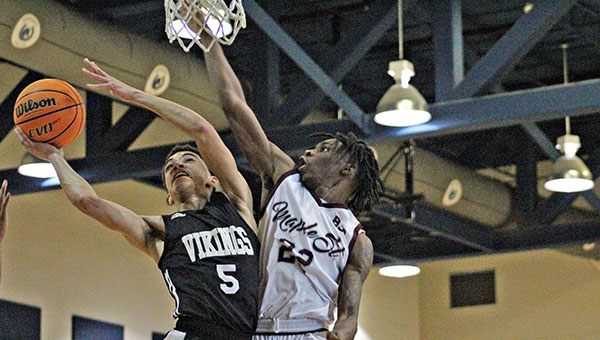 JACKSON — Nothing came easy for Warren Central on Monday, and that included a finish that was hard to take.

The Vikings rallied from a 10-point halftime deficit to take the lead in the final minute, but Lanier’s Damaurian Edwards hit two free throws with 10.3 seconds to go to give the Bulldogs a 46-45 victory in the boys’ JPS Trustmark Holiday Basketball Showcase.

“It’s kind of disappointing, but I think we got a good team effort. It’s just the small stuff we’re not getting. I guess it’s inexperience,” Warren Central coach Bruce Robinson said.

The loss closed out a strange 2020 for the Vikings (2-6). They did not have an offseason program because of COVID-19, went nearly a month without playing because of a schedule quirk, do not have a true home gym because of construction at Warren Central High School, and have struggled to gain traction with a young roster.

Their next game is Jan. 5, at home in the Region 4-6A opener against Clinton. Robinson wasn’t completely pleased with a gritty loss that was, after all, still a loss. He was, however, happy with the way his team has fought through adversity in other areas during the first half of the season.

“You want to have a chance to win at the end, and that’s what we had. This year hasn’t been a very pretty year. We tend not to celebrate moral victories, but we have to understand them and what point that puts us at,” Robinson said. “This is basketball. This is not football. We have a whole other season. The first season is over. What we’ve got is our district, and I feel good about it because I think we know what direction we’re heading in.”

Warren Central struggled with its shooting all game long — it missed more than a dozen layups and had several more blocked — but somehow stayed within striking distance thanks to good defense and rebounding. Lanier led 26-16 at halftime, but the Vikings trimmed the margin to four late in the third quarter and then tied it on a rebound basket by Williams with five minutes left in the fourth.

Lanier pulled back in front, but Warren Central battled back again and took a 45-44 lead on a reverse layup by Harried with 12 seconds to go. It was the Vikings’ first lead since early in the first quarter, and it lasted less than two seconds. Edwards was fouled on the other end of the floor and hit both of his free throws with 10.3 seconds left to put Lanier back in front, 46-45.

Warren Central had plenty of time to get a final shot off, but Williams got stuck with the ball outside the 3-point arc with time winding down. He launched an off-balance shot from the right wing that was well off the mark, and the rebound went long and out of the left corner as time expired.

Robinson said the rushed 3-pointer was not the play the Vikings wanted, and chalked it up to some of the team’s youth and inexperience.

“With 10 seconds left, you’re going to the hole with that ball. You don’t shoot a jump shot. You’re going to get to the hole and make the referees make a call. That’s what we expected,” Robinson said. “But we’re so behind on stuff … we’re still trying to do summer stuff. This is the point where we realize that, with a young and inexperienced team as opposed to a team with six, seven, eight seniors that have played.”

JACKSON — The Vicksburg Missy Gators let one double-digit lead slip away on Monday, and then most of a second... read more