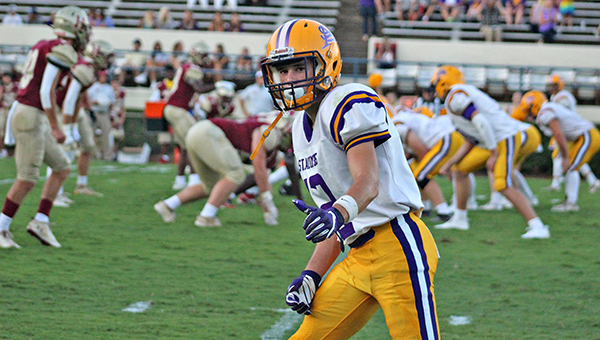 For the past couple of years, St. Aloysius had been hoping the next round of realignment in the Mid-South Association of Independent Schools would bring some relief from a difficult football district and schedule.

St. Al will move from Class 5A to Class 4A in the realignment plan, but will be in a district with perennial powers Riverfield, Adams County Christian School and Tri-County. Those three teams have combined for six state championship game appearances and three state titles in the last four seasons.

Clinton Christian is also in the district.

The full MAIS realignment plan has not yet been released publicly, but it has been sent to the association’s coaches and athletic directors and is in the final stages of being finalized.

“I don’t think it matters. This league is competitive in every classification. There’s no class that’s any easier than the others. In every class, you’re going to have good teams that you can’t get away from,” St. Al football coach Stacy Sizemore said. “That’s a pretty good district, top to bottom. It’s going to be interesting how it shakes out. Every week is going to be one of those kinds of games.”

St. Al has never played Tri-County or Clinton Christian, but has played Riverfield and ACCS every season since joining the MAIS in 2015. St. Al and ACCS have been in the same district the past two seasons. Riverfield and St. Al were district rivals from 2015-18, until Riverfield was placed in a different classification in the 2019-21 realignment cycle.

St. Al athletic director Mike Jones said the primary benefit of dropping down to Class 4A will be seen in St. Al’s non-district football schedule. Class 5A teams in the MAIS occasionally wind up with Class 6A opponents on the schedule, but 4A teams do not.

“It’s a good thing because we won’t have to play any of the 6A schools. Being 5A, you would have had to play some 6A schools. But being 4A, they’re not going to put you in that alignment,” Jones said. “So in that respect it’s a good thing. But in the respect of just playing 4A schools, we’re in a district with 4A schools that are as good as any of them.”

Football schedules are made through the MAIS office, so no matchups are 100 percent certain until the master schedule is released in January. Jones hopes, though, to continue one long-running rivalry with Cathedral and restart a dormant one with Madison-St. Joseph.

St. Al and Madison-St. Joe played each other 54 times from 1952-2016, including every season from 2007-16. The series went on hiatus when St. Al joined the MAIS and St. Joe remained in the Mississippi High School Activities Association. St. Joe will join the MAIS for the 2021-22 school year, however, and the potential to renew the rivalry was rekindled.

“I’m looking forward to it,” Sizemore said. “It’s always good to get back to the rivalries of the past, and it’s good for the alumni to have bragging rights.”

Jones was also excited about the possibility of starting some new series with MAIS teams St. Al has not played.

“We’ll try to keep Cathedral, and we’re going to try to play Madison-St. Joe if all that works out,” Jones said. “Hopefully we pick up a couple of new schools that we haven’t ever played. We looked at Columbia and East Rankin, and a couple of those schools and hopefully we can play them also.”