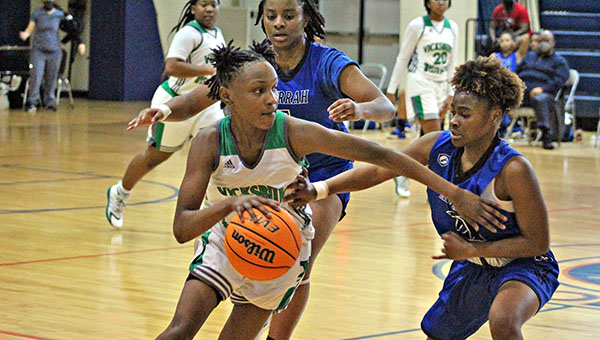 JACKSON — The Vicksburg Missy Gators let one double-digit lead slip away on Monday, and then most of a second as well. It wasn’t the kind of performance they’ll brag about at the end of the year, but it was just barely good enough to add a mark to the win column.

“It feels extremely good. That’s part of our maturing process. Now that we’re finding ways to win games, even through adversity, it shows that they’re maturing,” said Vicksburg coach Troy Stewart, who has six sophomores and only two seniors among the 12 players on the roster.

The Missy Gators (7-5) have one more game left in the JPS Showcase, Tuesday at 1 p.m. against Forest Hill. After that, it’s on to the games that really matter in Region 4-5A. Six of their eight games in January are against region opponents, beginning Jan. 5 at Callaway.

The Missy Gators had a couple of chances to turn Monday’s game against Murrah into a rout, but could never deliver the knockout punch. They turned defense into offense with steals and transition baskets, and held a 31-20 lead late in the first half before frittering it away with a long scoring drought in the third quarter.

Vicksburg only made one field goal in the first five minutes of the second half, which allowed Murrah to tie the game at 34.

The Missy Gators stopped the bleeding with four straight free throws and a three-point play by Sims, and then added five quick points in the opening minute of the fourth quarter to take a 46-35 lead with seven minutes remaining.

Murrah’s only point over the last 3:20 of the third quarter was a free throw by Trinity Tyner. Depth and foul trouble combined to put the brakes of the Missy Gators’ aggressive defense, however, and Murrah took advantage to climb back into the game.

The Mustangs got as close as two points, 55-53, on a free throw by Ty Raven McGowan with 1:26 left. The Missy Gators then made six free throws in the last 90 seconds to close it out.

“Foul trouble always gives us a hard time. Trying to figure out a lineup that can finish a game if we’re in foul trouble is becoming more and more a part of the deal,” Stewart said.

Eight players scored for Vicksburg in the game, and the entire roster contributed. Knight finished with nine points, Kalia Bland had seven and Layla Carter had five.

“I thought we played defense extremely well,” Stewart said. “We let them get away in the fourth quarter trying not to get in foul trouble, but I think we played well defensively. It’s a downside from my numbers this year. We normally play 16 or 17 girls, and now I’m only playing seven consistently, and that’s the difference.”

(B) Vicksburg 60, Murrah 47
Sean Hardy flirted with a triple-double, finishing with 13 points, 14 rebounds and seven assists, to lead Vicksburg High past Murrah at the boys’ JPS Trustmark Holiday Basketball Showcase on Monday.

Keshawn Brown also had 13 points, along with nine rebounds, as the Gators (7-4) bounced back from a loss to Forest Hill in their opening game of the tournament.