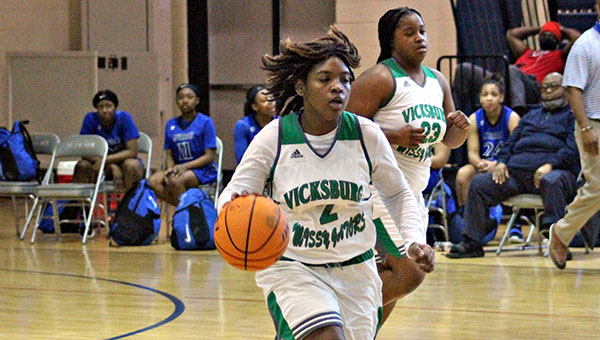 Layla Carter posted a double-double, with 16 points, 12 rebounds and four steals, and Vicksburg High defeated Forest Hill 50-36 on Tuesday in their final game of the JPS Trustmark Holiday Basketball Showcase in Jackson.

Ja’Na Colenburg added nine points for the Missy Gators (8-5), while Destini Sims had eight points, five steals and three blocked shots. Vicksburg had 20 steals in the game — Janiah Caples and Kalia Bland also had four apiece — and shot 51.5 percent (17-for-33) from the field. Carter was 7-for-10 from the field.

Vicksburg led 21-15 at halftime, but blew the game open by outscoring Forest Hill 18-4 in the third quarter.

The Missy Gators won two of their three games at the JPS Showcase to head into the second half of the 2020-21 season with some positive momentum. They will return to Jackson for their next game, Jan. 5 at Callaway in the Region 4-5A opener.