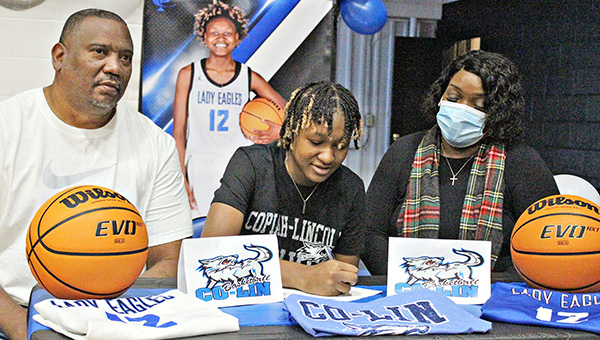 When Yakia Burns was in junior high, her coach recalls her as being a player not many teams would have wanted on their roster.

That was a long time and a lot of days in the gym ago.

Four years later, the senior at Porter’s Chapel Academy is in high demand and going places. In the midst of a breakout season in which she is averaging more than 30 points per game, Burns has signed with Copiah-Lincoln Community College and is emerging as one of the top high school basketball players in Mississippi.

“Going into eighth grade, she was that player that no one had to worry about. And then that summer going into her eighth grade year, all we did that summer night in, night out, was put work in,” said PCA assistant coach De’Andre King, who also coached Burns at Vicksburg Junior High. “She never stopped working, and she became No. 13 in the state in her class of 2021. Ever since then she’s been on the radar.”

Burns signed with Co-Lin in mid-November, but formally celebrated with a brief ceremony before the team’s practice on Monday. She was recruited by most of Mississippi’s junior colleges, as well as some mid-major Division I programs like Southern Miss, Austin Peay, Tennessee-Martin and Missouri State.

The offers from most of the four-year schools seemed tentative, however. Co-Lin has won eight state championships under longtime coach Gwyn Young, and Burns said the chance to improve her game and firm up the Division I offers was a better opportunity for her.

“I went to Co-Lin due to the fact they major in academics and Coach Young has a winning record and he sends his players to better schools after juco. And the Wolfpack program fits my style of play,” she said.

Burns spent the first three years of her high school career at Vicksburg High and was a two-time Vicksburg Post All-County selection in 2019 and 2020. She averaged 10.8 points, 4.9 rebounds and 2.1 steals per game last season as Vicksburg reached the semifinals of the MHSAA Class 5A state tournament.

Burns then transferred to Porter’s Chapel over the summer and has taken on a new role as a superstar. She’s averaged 33.7 points, 6 steals, 7 rebounds and 5 assists through the first 15 games of this season. PCA has an 11-4 record. Burns had a 50-point game earlier this season and was one rebound short of a triple-double.

“Watching her play this year has been phenomenal. When we needed her, she’s stepped up,” King said. “She did a great job at Vicksburg as well, but just seeing her with the ball in her hands most of the time, being the playmaker that she is, it’s priceless. She’s not a selfish player. She’s averaging five assists. So she’s getting everybody involved and still scoring. It’s priceless.”

Burns said her development into a college prospect and top-flight player has been the result of a lot of hard work.

“Work. I’ve put in a lot of work. A lot of practice. My teammates and coaches helped me get to where I am,” Burns said. “It’s very satisfying.”