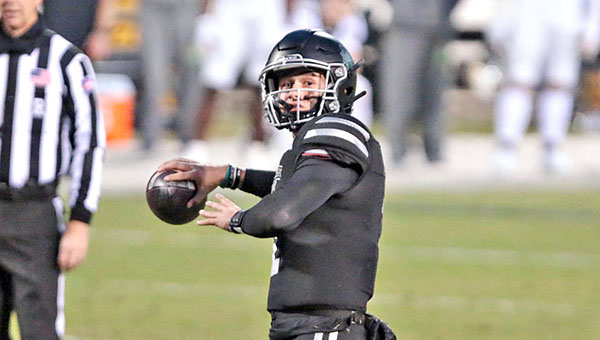 Mississippi State quarterback Will Rogers throws a pass earlier this season. Rogers is one of a number of freshmen who have started for the Bulldogs this season, and will lead the team into the Armed Forces Bowl Thursday against Tulsa. (Walter Frazier/For The Vicksburg Post)

As the 2020 season unfolded, it quickly pivoted from one Mississippi State hoped would end with a Southeastern Conference title to one in which it was building for the future.

It seems clear the Bulldogs have done just that.

A total of 26 players made their first career start in 2020, which is tied for the FBS lead. Nearly half of Mississippi State’s snaps have been taken by first-time starters.

The youth contributed heavily toward a 3-7 record, but also a postseason appearance when the Bulldogs take on Tulsa (6-2) in the Armed Forces Bowl Thursday in Fort Worth, Texas.

“We’re excited that the young guys got the recognition they did, and there were some others that I think would be very close,” Mississippi State coach Mike Leach said. “We have pretty good freshmen that, although they weren’t freshman all-SEC, they were good players for us.”

Walley has been a breakout star for the Bulldogs. He has caught 48 passes for 691 yards, the latter an MSU freshman record, and has four 100-yard receiving games to his credit.

Walley and running backs Jo’quavious Marks and Dillon Johnson are all in position to break the previous MSU freshman record for receptions. Marks has 56 receptions and Johnson has 34. The previous record was 37.

Quarterback Will Rogers took the starting job from graduate transfer K.J. Costello early in the season and made it his. Rogers has set MSU freshman records for passing yards (1,828), attempts (316) and completions (220) and set several single-game records along the way. He’s thrown for 10 touchdowns and seven interceptions.

“I think he’s done a really good job. He’s as far along as any true freshman that I’ve had,” Leach said of Rogers. “Part of it is, I think, coaches’ kids there’s valuable information that passes across the dinner table along with the potatoes or roast beef or whatever they’re eating. Guys that grow up with it seem to have a little bit of depth to their knowledge and an understanding of studying film. I think that’s served him extremely well and then also just knowing how to carry himself with the team in the huddle. I think he’s continued to grow in that regard.”

One of the benefits of a bowl game is that teams typically get an extra two or three weeks of practice. Because of a schedule altered by COVID-19, the prep time for the Armed Forces Bowl has been reduced to two weeks.

Leach said he gave players a week off for Christmas between the regular season finale against Missouri on Dec. 19 and the start of bowl week on Sunday, which further ate into the practice time. When it’s all said and done, the Bulldogs will have four practices for the bowl game, Leach said.

“It’s not the traditional bowl schedule where you can really work your young guys a lot. It’s really more like a game week for a road game,” Leach said.