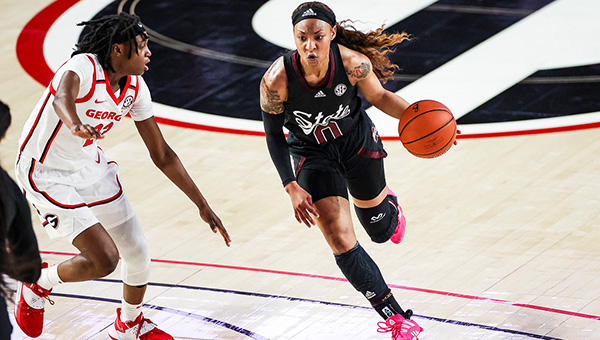 Mississippi State women finish 2020 with a victory over Georgia

ATHENS, Ga. (AP) — Freshman Madison Hayes and Jessika Carter led a balanced attack with 13 points apiece, and No. 12 Mississippi State made 15 of 21 free throws in the fourth quarter to hand Georgia its first loss, 69-62 on Thursday in the Southeastern Conference women’s basketball opener for both teams.

In the battle of Bulldogs, Mississippi State led by 14 points when Sidney Cooks hit a 3-pointer to open the fourth quarter. A three-point play by Rickea Jackson had MSU up 55-42 with 7:44 to play, but it was the last field goal of the game for Mississippi State.

“I’m really thankful that we were able to finish our year off with a win going into the new season,” Mississippi State coach Nikki McCray-Penson after her first win in conference play. “When I look back over this game, we had talked about a couple of things that needed to take place. Transition defense, I thought we had to give up some stuff to take away what they really do well. They only scored six points in transition. That was key for us. When we got in the half court, we knew they were a team that liked to get points in the paint, so we wanted to limit that. At the end of the day, we needed to have more points than them in the paint, which is what we did.”

Jenna Staiti led Georgia with 17 points and 10 rebounds, and her three blocked shots give her 144 in her career, ninth on the school list. Georgia had four blocks to increase its nation-leading total to 60.

Que Morrison added 11 points for Georgia (8-1). Earlier this season, Georgia picked up its 1,000th victory in program history, joining Tennessee in the SEC and 14 other schools to reach that milestone.

The game featured 46 fouls, split evenly. Mississippi State finished 21 of 29 from the line and Georgia 19 of 25, with 44 of the 54 free throws taken in the second half, 37 in the fourth quarter.

Mississippi State’s game with Vanderbilt on Sunday was postponed because of Vanderbilt’s COVID-19 issues. Instead, the Bulldogs will host No. 13 Kentucky Sunday at noon at Humphrey Coliseum.